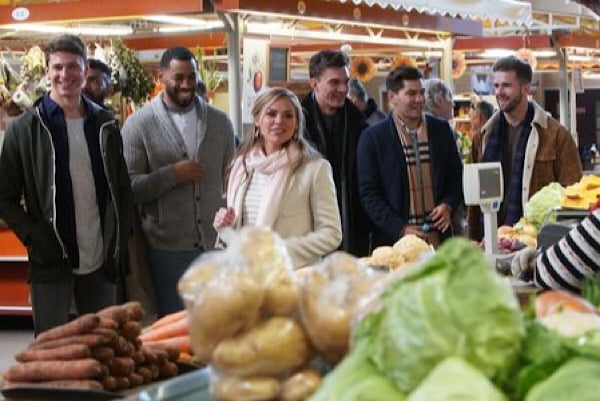 Tonight’s episode of ABC’s The Bachelorette takes place in Latvia. When we last left off, Hannah was debating on quitting the show due to the drama, but ultimately decided to stay. Of course, we still have Luke drama….hopefully that will end soon.

Garrett gets the first one on one date. They go hiking and then discover people bungee jumping naked. Of course, this is their next course of action. I don’t know what is scarier, the jump or being naked with a dude I barely know.

They kiss and jump. They scream and seem to enjoy it, so…woo? To celebrate, they toast with champagne, talk and canoodle.

At dinner, they discuss life, facing fears and rejection. He gets a rose and they seal it with a kiss. They also dance as some random musician plays in the street.

Garrett gushes about the date to the guys, which pisses Luke off. He doesn’t believe that it happened the way he says it did.

Hannah invites the of the rest of the guys on the group date, except for Peter, who gets the second one on one. The group date consists of exploring, food, drinking and the guys one upping each other in order to get her attention. Hannah also comes clean about the naked bungee jumping, which makes Luke even angrier. He thinks she crossed the line and considers it a slap in the face. He says her body is her temple and should only exposed to her husband.

As she mingles with the other guys, Luke won’t shut up about the date with Garrett. He even beats around the bush about how he feels, which is beyond weird.

Tyler gets the rose and Luke is again unhappy. However, he thinks he will get the final rose.

Hannah’s date with Peter is some sort of singing ceremony. They then do a body cleanse and what looks like time in a sauna. I’m confused. Oh, and they make out. A lot.

Dinner consists of sweet conversation and him admitting he is already falling for her. He gets a rose. They seal it with a kiss as fireworks explode.

Jed sings outside her room, which is cute. She invites him in and they spend time together. She thinks this is straight out of a romance novel. They make out.

Luke is still complaining and thinks he deserves details about the infamous naked date, causing him to get into a fight. Word gets back to Hannah, who calls him out on it. She is not happy with him and doesn’t like how controlling and possessive he seems to be. She says they are not married and she can do whatever she wants. He defends himself, saying he trusts her and pulls the ‘staying in my own lane’ card. They continue to fight and I kind of tune out, to be honest.

The guys are still fighting and I kind of tune out. Chris tells them the cocktail party is cancelled and the rose ceremony is about to begin.

Tyler, Peter and Garrett all have roses.

Jed (singing dude who makes me think of The Beverly Hillbillies)

Mike (Dude who loves his grandma)

Dustin (Not a clue)

Dylan (No clue, apparently he shared stuff with Hannah. Must have been when my TV went nuts during the thunderstorm.)