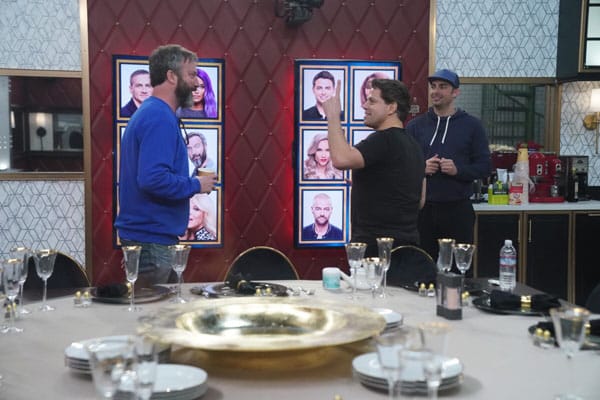 We get back to the house and everyone is talking about what happened. The Mooch thinks that Ryan is getting rid of threats and that he would have done the same things if thr roles were reversed.

Jonathan thinks his alliance will save him.

As an aside….I am going back to the gym and won’t stop working out until I have LoLo’s body. Girlfriend is FIERCE! I’m woman enough to admit I am totally jealous.

Omg, it is Wednesday and Jonathan is wearing pink! Regina and the Plastics would be so proud. He thinks Ryan is his ride or die in this competition.

The Mooch is talking about Twitter and The President. Honestly, I don’t know what he is going on about, and I plan to keep politics out of this.

LoLo and the other girls are beginning to question Jonathan’s loyalty and think he is playing them. They decide to align on their own in order to get rid of him.

Tamar busts LoLo and Natalie’s final two plan…because they are discussing it while she is in the room. This causes some tension between LoLo and Tamar, especially when Tamar threatens to punch her in the throat. LoLo didn’t realize she was joking and tries to explain that and Tamar finally gets it. They hug it out. However, Tamar is still not happy about the alliance.

Ryan realizes the girls are plotting and plans to turn things up a notch. He and Jonathan plan to have one of the girls be the replacement nominee if he wins.

LoLo wants to trust Ryan, but worries about Jonathan’s influence. She calls them out, which pisses them off. Ryan now wants to be in the winner’s circle and get LoLo out.

The three nominees, Ryan, Ricky Williams (I totally forgot he was there!) and Joey Lawrence are competing in the Veto Competition. It has a Western theme and LoLo is hosting.

They will ride a fake horse and have to stack gold bars on a horse shoe. Winner gets POV.

Ricky wins and now has to choose what to do with the POV.

Tamar and Kandi now seem to be forming an alliance and talk out their issues. However, they end up fighting again and it looks like the alliance is over before it even began.

Ryan talks to Ricky about how to get one of the girls on the block. He thinks the girls are acting shady and especially wants to get rid of LoLo. Ricky goes to tell her and she is gutted over Ryan betraying her.

LoLo is pissed and tells the girls what is going on. Tamar says they need to keep her off and that she and Kandi need to put their differences aside for the sake of their alliance.

At the veto meeting, Ricky decides to not use the POV because nobody gave him a strong enough argument. He thinks none of the people up there are really worth saving.

The Mooch is ready to schmooze and Tom calls it disappointing. Jonathan is ready to make moves and thinks just got real.

LoLo thinks that if Ricky is telling the truth, then it is time to get rid of Jonathan.