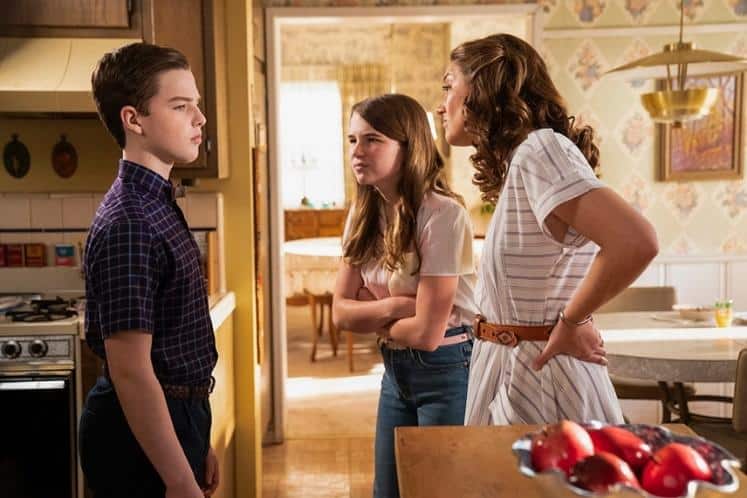 The episode opens with Tom (Pete Holmes) drinking a smoothie Lew (Tahj Mowry) made him from grass in his mom’s backyard. This puts him in a bad mood since he is worried about the tournament.

They both wonder where Archie(Chi McBride) is since he is not at work. Lew says he has to clear his browser history if he doesn’t show up to work.

Tom goes to check on Archie, who is home, all depressed since Helen ghosted him. He plays the sax in his pjs as he tells Tom about the situation. Tom, for his part, says everything is fine and tells him to get a move on. Archie continues to play, so Tom again pushes him to get going.

At the bowling alley, Tom is trying to practice, but Archie is still brooding. Tom and Lew try to get him to focus, but no avail.

Helen (Julie White), Tia (Amanda Perez) and Jen (Katie Lowes) are working on the home salon. They are excited about the progress, even though Helen is being snarky. Jen is impressed with Helen’s work and she says she learned a lot when her husband died.

Tom comes home to ask Helen about why she is ghosting Archie, which causes a fight because he is making it about himself. The tension continues until after dinner, when he and Jen are still talking about it.

Helen is listening at the door and lets them know Archie is married. This causes Tom to go to the alley and fight with Archie, who doesn’t think he did anything wrong.

Jen, for her part, talks to Helen about the situation. Helen admits to snooping and says she won’t talk to another woman’s husband. She also admits that things were moving to the next level and she was getting scared.

Tom takes Archie to see his ex Loretta (Sheryl Lee Ralph), which scares him, especially when they run into the woman herself. The three of them talk and Archie officially gets divorced.

Archie goes to apologize to Helen and they make up. They seal the deal by getting bear claws, while Jen and Tom make up as well.

The episode ends with Jen and Tom eating breakfast when Archie and Helen walk in after their night together.

The season finale opens with Adult Sheldon talking about superheroes and George in the bar. His rival tries to talk to him and buy him a beer, but George is not having it because Roy knows about George’s job being on the line and wants to rub salt in the wound.

The next day, Sheldon discovers a zit on his face, while Penn and Teller (as themselves) parody a puberty health video that describes Sheldon’s current situation.

Mary tells him it is a zit, while Missy makes fun of him.

At school, George finds out Wayne will be taking George’s job, causing him to tell Tom he is quitting before he gets fired.

Georgie is at work, selling beer to make extra money when MeeMaw walks in. She tells him it is illegal and tries to stop him from selling it and people from drinking. Georgie says he needs money for the baby and needs money. However, MeeMaw won’t help.

At the doctor’s office, Sheldon is told he just has a pimple while Penn and Teller continue to parody. He later goes on to talk to Principal Linkletter about it, but he is not interested. He sends for President Hagemeyer to avoid litigation, leading them to reminisce on their younger years.

George tells Mary he quit his job. She is upset since they are both out of jobs and have to support the family. They look at the classifieds, only to find they are not qualified for any of the jobs available.

Georgie and MeeMaw plot to make more money. He suggests selling cigarettes by purchasing them and marking them up at the casino-laundromat. MeeMaw recalls driving south of the border to buy them in her younger years, causing Georgie to plan to do the same thing. He asks Wade to go, but MeeMaw gets wind of this and agrees to go with him instead.

Mary gets them applications for the local grocery store, but George is not interested. This causes them to fight and for her to storm off in anger.

That night, Sheldon dreams about his family’s life going awry.…and his pimple. Penn and Teller continue to give commentary on his puberty journey.

He wakes up from the dream and asks Missy for help via walkie talkie. She goes in to help him and they have a sweet heart to heart, which includes her wanting to marry Vanilla Ice (which Sheldon thinks is a snow cone).

The next day, George is home watching TV when Mary asks him to look at the classifieds. He doesn’t want to, leading for her to storm off in anger once again.

Georgie and MeeMaw drive to Mexico and bond whilst listening to Johnny Cash.

Mary visits Brenda at the bowling alley to try and get a job. Brenda doesn’t want to give her a job, but Mary insists it is right up her alley. She also admits everything is falling apart.

Missy helps Sheldon pop his pimple, causing the Penn and Teller to end their puberty commentary.

George comes home in a bad mood. Mary tells him she got a job, but he feels weird since it is with Brenda. However, before he can comment, MeeMaw calls and says she and Georgie got arrested at the border.

The episode ends with Sheldon debuting his Flash t-shirt that became iconic on Big Bang Theory.