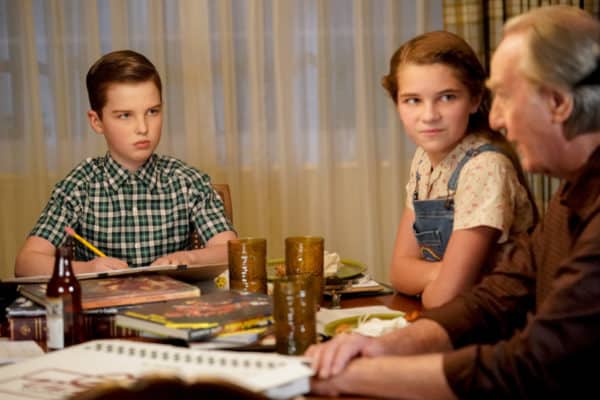 “A Musty Crypt and a Stick to Pee On” - Pictured: Sheldon (Iain Armitage) and Missy (Raegan Revord). Dale and Meemaw work out relationship issues while playing Dungeons and Dragons with Sheldon and Missy. Also, Mary and George take a trip with Coach Wilkins (Doc Farrow) and his wife, and Georgie freaks out when his girlfriend thinks she’s pregnant, on YOUNG SHELDON, Thursday, Dec. 17 (8:00-8:31 PM, ET/PT) on the CBS Television Network. Photo: Robert Voets/2020 Warner Bros. Entertainment Inc. All Rights Reserved.

CBS’s hit sitcom Young Sheldon has been renewed for THREE more seasons, TVGrapevine has learned. The series, which is a prequel to The Big Bang Theory, is currently in its third season. Check out more information below:

“Under Chuck Lorre’s and Steve Molaro’s deft leadership, this superb cast and gifted writers have truly brought these wonderful characters to life,” said Kelly Kahl, President, CBS Entertainment. “YOUNG SHELDON dominates the broadcast comedy landscape by over +2.5 million viewers and is the lynchpin of CBS’ top-rated Thursday comedy lineup. The humor, warmth and heart exuded by the Cooper family is an undeniable hook for the millions of fans who tune in each week. We’re excited to see what the next three seasons have in store for a slightly older Sheldon and all the Coopers.”