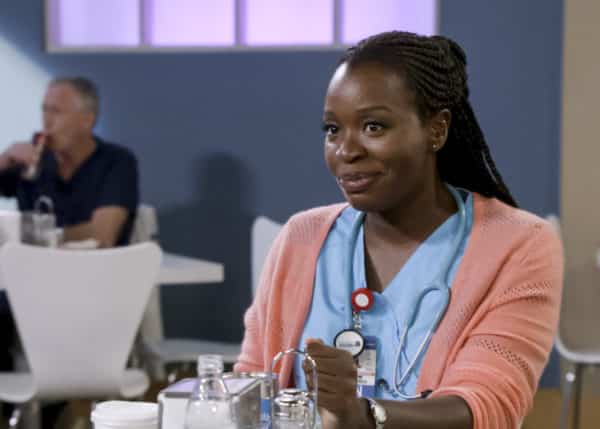 “On a Dead Guy’s Bench” – Bob enlists Tunde’s help to buy an engagement ring, but his plans to propose to Abishola are upended by her belief that a traditional marriage is more trouble than it’s worth, on the second season premiere of BOB HEARTS ABISHOLA, Monday, Nov. 16 (8:30-9:00 PM, ET/PT) on the CBS Television Network. Pictured (L-R): Folake Olowofoyeku as Abishola. Photo: Best Possible Screengrab/CBS ©2020 CBS Broadcasting, Inc. All Rights Reserved

The episode opens with Tunde (Barry Shabaka Henley) and Bob (Billy Gardell) meeting up to buy a ring for Abishola. They discuss what they told their significant others to keep her from finding out. Bob said he was meeting a friend from college, while Tunde just went into the bathroom with a newspaper, only to go down the fire escape.

The men arrive at the jewelers. Bob wants a simple, classy ring, like the woman he is proposing to. Tunde wants them to hurry so he can go back to the restroom. The ring costs over $11,000, but Tunde haggles it down to a lower price by telling Dave the jeweler (Ryan Cartwright) he wants him to have the sale so he can move out of his parents’ house. They end up with an undisclosed deal.

At home, Bob tells Dottie (Christine Ebersole) that he plans on proposing. Dottie is thrilled, especially since they will all be living together. Bob is surprised she isn’t moving back home, but he is given a look. He says he will talk to Abishola’s family about Dottie keeping her bedroom.

Olu (Shola Adewsui), Dele (Travis Wolfe Jr) and Tunde eat dinner together. He compliments her pepper soup and she wonders where he really was that day because the bathroom didn’t ‘smell like death,’ as Dele put it. He says he cannot talk in front of the boy, so they send Dele away. Tunde tells Olu the truth, but makes her promise not to tell Abishola. However, she spills as soon as Abishola (Folake Olowofoyeku) comes home.

At work the next day, Abishola tells Kemi (Gina Yashere) and Gloria (Vernee Watson) about the plan to propose. She will have to go back to Nigeria, not only to get divorced, but get approval. Kemi says she will make a beautiful bridesmaid, but Abishola says she has not asked her to be one yet.

Later on, Bob and Abishola meet up on their bench, which is dedicated to a man named Stanley. They talk about the future and she tells him she does not want to get married, but wants to spend the rest of her life with him. He offers to let her see the ring, but she declines. She says the bench is special to them and he snarks about it belonging to a dead guy.

Tunde and Bob discuss Abishola’s rejection. Tunde blames the proposal and offers to talk to her as they go return the ring. Bob says it is for the best, but Tunde disagrees since they are returning a ring he worked so hard for.

Christina (Maribeth Monroe) goes to comfort Bob. He says he is with Abishola, but then Christina makes it all about her and her lack of a relationship. She begins to cry and Bob goes to comfort her. Douglas (Matt Jones) walks in to talk to Bob, but Christina kicks him out.

Abishola is helping out a patient whose wife keeps talking for him. Kemi walks in to get his food and wonders why he didn’t eat. His wife says he doesn’t like eggs and he says he can speak for himself. He says he doesn’t like eggs and snarks to his wife that she should have married his brother. She says there was only one date between them, or two, if they count Atlantic City. Kemi asks to hear the end of the story and then goes out to tell Abishola that the woman married the wrong brother. Abishola listens to the couple and begins to change her mind about Bob.

Kofo (Anthony Okungbowa)and Goodwin (Bayo Akinfami) go to congratulate Bob on his engagement. However, he tells them what happened, which causes the cousins to wonder why it happened the way it did.

Later on, Kemi and Abishola are on the bus talking about Kemi’s plans with her boyfriend. Bob then walks on the bus to talk to Abishola. She ends up proposing to him, with Kemi encouraging everyone to clap….until Bob says he returned the ring.

The episode ends with Bob and Tunde going to buy the ring again….with Tunde asking for a better price because the ring is now secondhand.