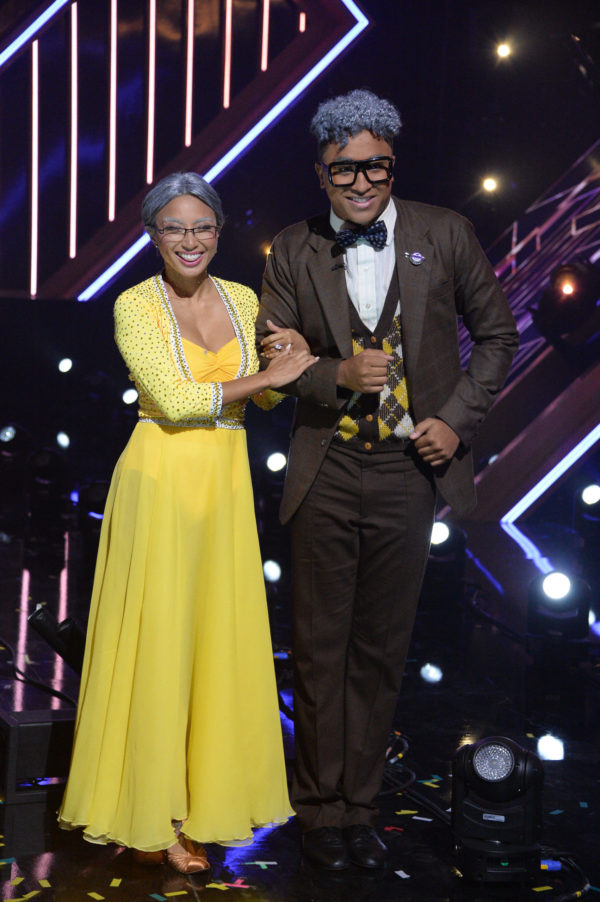 DANCING WITH THE STARS - "Disney Night" - With a dash of pixie dust and a touch of illusion, 14 celebrity and pro-dancer couples compete for the third week as the magic of Disney returns to the ballroom live for the 2020 season, MONDAY, SEPT. 28 (8:00-10:00 p.m. EDT), on ABC. (ABC/Eric McCandless) JEANNIE MAI, BRANDON ARMSTRONG

Tonight is Disney Night on ABC’s Dancing With The Stars. Our remaining fourteen couples will dance to Disney themed songs while the ballroom has specially themed decorations. Host Tyra Banks is dressed as Minnie Mouse. Derek Hough, Carrie Ann Inaba and Bruno Tonioli are the judges….and they are all in costume today!

Song: Almost There from The Princess and the Frog

Sammi: This song seems a little slow for a jive? She did pretty well in terms of technique, but that song completely threw me off. They should have used a faster song or a different dance.

Derek: She looks like a princess out there. He gives her some pointers on where to improve.

Bruno: He liked it, but thinks she was too tight.

Carrie Ann: She can tell she was nervous and tells her how to focus. Otherwise, it was a job well done.

Song: Part of Your World from The Little Mermaid

Sammi: She did SO much better this week! She seemed much more relaxed and really took in what the judges said to improve. That technique was wonderful and she had great lines and musicality.

Bruno: She was fluid and flowing, but watch the posture.

Carrie Ann: She was like a different person on the dance floor tonight.

Derek: Watch the feet, but much better this week!

Claim to Fame: One Day At A Time star

Sammi: This has to be one of the cutest dances ever. It was a bit slow, but she really seemed to be having fun. I also love how we got to hear more about her family dynamic. It seems like they are very close knit and sweer.

Carrie Ann: She really enjoyed it.

Derek: He enjoyed it, but gives pointers on the footwork.

Bruno: He agrees with Derek.

Sammi: It is no surprise that this dance is his best so far. The quickstep is Cheryl’s forte and wow, it was incredible. The technique, the spirit, the improvement…..everything was just amazing.

Derek: His frame improved and he made him smile.

Bruno: He loved it.

Carrie Ann: She likes how he adds his own style to the dance.

Song: Zero to Hero from Hercules

Sammi: I love these two together. They have such a different kind of chemistry where they look like they are always having fun. The dance was a bit messy in terms of technique, but what they lacked in that, they made up for in spirit and heart.

Carrie Ann: It started off great, but lost it toward the end….and the lifts! NO!

Derek: He loves the commitment to the roles, but offers some advice on where they can do better.

Claim to Fame: The Real and Holey Moley host

Song: Married Life from Up

Sammi: That was poetry in motion. She dedicated it to her fiance and even though he isn’t there, you can feel the love she has for him. The two of them practically floated on the floor in near perfection.

Carrie Ann: She found her place, even though she needs to work on her turns.

Bruno: It was pure storytelling.

Jeannie hugging the 8 was the funniest, cutest moment of the season.

Sammi: WHOA NELLY! Who knew Nelly had a smooth side like this? He needs to work on his frame a bit, but otherwise this was his best dance to date. The two of them have amazing chemistry and he really seems to focusing on this technique. It is obvious how much he wants this and to make Daniella proud.

Derek: He did well for his first ballroom dance, but got ahead of the music a bit.

Bruno: It was a proper, slow foxtrot, but watch those shoulders.

Carrie Ann: He has a natural side to him, but wants him to break out more.

Sammi: It didn’t seem like a samba because the music was wayyy too slow, but despite that, they did put in their best effort, which is all we can really ask for as viewers.

Carrie Ann: She is very tender and while it was lacking some things, it was beautiful.

Derek: It was missing bounce and rhythm, but she did it!

Sammi: This is by FAR the best dance of the night. Even with an injury, she managed to kill it and hit every move, shape and line. She needs to work on the feet a bit, but I am chalking it up to her injury.

Derek: It was so lyrical, but watch the feet.

Bruno: It was wonderful.

Song: Be Our Guest from Beauty and the Beast

Sammi: He is another one who is turning into a contender. His personality shines through the entire dance and his footwork and technique seem to be improving every week. He does need a bit of polish, but other than that, he is nearly flawless.

Derek: He loves watching him dance.

Bruno: He was the perfect Lumiere.

Carrie Ann: They found their balance and it was one of her favorite dances.

Song: Angelica from Pirates of the Caribbean: On Stranger Tides

Sammi: He just took the competition and raised it to a whole new level. That was by far his best dance of the season, or maybe even the best of the season so far. He hit every move, kept up with Jenna and wow, was that hot. Their technique and chemistry is off the chain!

Bruno: He loved it!

Carrie Ann: She points out the lift, but otherwise, she enjoyed it.

Derek: He loves the technique and says they are cooking with hot sauce.

Sammi: Welcome to the competition, Johnny….you nailed that, baby! He finally relaxed and let go, making this dance that much better. It was lyrical, beautiful and those lines…everything was in sycn tonight.

Carrie Ann: She sees the transition happening on the dance floor.

Derek: It was beautiful.

Bruno: He loved the emotions and shapes in the dance.

Sammi: This theme is so much fun. He is another one you can tel is putting in a lot of effort.

Bruno: He is moving much better.

Song: A Dream is a Wish Your Heart Makes from Cinderella

Sammi: What a way to end the night. I feel like this is going to be one of the hardest seasons to judge and watch because everyone is pretty much on an even playing field in terms of dancing and bringing their A-Game. Chrishell is no exception. Tonight she glided on the floor and really improved her technique. She also is gaining confidence, making the performance that much better.

Bruno: She is the gorgeous belle of the ball.

Carrie Ann: They are stunning.

Derek: Stunning, but watch the feet!

Results: Nelly and Daniella, Nev and Jenna, Monica and Val, Vernon and Peta,Chrishell and Gleb, Kaitlyn and Artem, Johnny and Britt, Jesse and Sharna, Jeannie and Brandon, Justina and Sasha, AJ and Cheryl and Skai and Alan are safe.

Anne and Keo and Carole and Pasha are in the bottom two. The judges will now choose who to save.

Derek chooses to save Anne and Keo.

Carole and Pasha are eliminated. More next week…stay tuned!