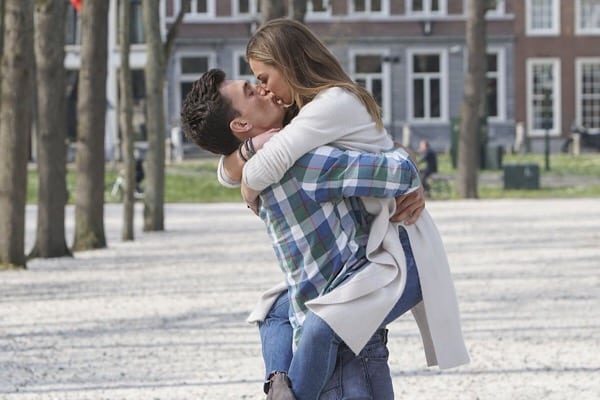 Tonight is the hometown dates on ABC’s The Bachelorette. Hannah will go home with Jed, Tyler, Luke and Peter and then decide who will move on to the Fantasy Suite Dates.

Peter’s Date: They go for a drive, which has an awkward moment when she finds a condom in his car. They joke about it a bit and then go for a private flight before meeting his loved ones.

It is the usual eating, talking and opening up about feelings, love and emotions. Peter’s dad even cries a bit after seeing his son so happy. His mom is a bit worried, but in the end, everyone seemed to have gotten along.

Tyler’s Date: They go to the beach and enjoy time in the water and on a boat, as well as a concert. She admits there is a lot of sexual tension there, and wonders if there is more to their relationship.

Tyler is worried about his dad, who has vocal cord issues and almost died a few months before taping. They have a sweet moment together as he introduces Hannah to everyone. Jeff (Tyler’s dad) seems to really like Hannah and thinks that there is something special there. This is probably one of the best hometown dates we have seen in awhile, so sweet, drama free and just about love.

Luke’s Date: They go to a prayer group and he tells her about his hard partying ways before he found God in the shower. She seems very moved by this and can feel the goodness in him.

When they get to the house, they open up about some of the drama in the house….which is….awkward. He also talks to his dad and tells him he can’t see this not working out at this point. He also apologizes to Hannah about his behavior and all seems to be right with them…..for now. She also admits she is falling in love with him.

Jed’s Date: They go to a recording studio and make some music….because he is a musician, remember? He also tells her he loves her before they head to his house.

This ends up being the most awkward date in the show’s history. Jed’s mom worries that Hannah is falling for the other guys and telling them she is in love with them. She also doesn’t really trust Hannah, nor does his sister, who doesn’t think she is the right woman for her brother. His dad worries about her supporting his music career. Needless to say, it is very uncomfortable.

Rose Ceremony. Tyler and Peter get roses right away, but she takes a moment before deciding what to do about Jed and Luke. In the end, she gets an extra rose from Chris Harrison (does he have an in case of emergency rose?) and gives them both a rose, thus sending all the guys to the Fantasy Suite dates next week. Stay tuned.