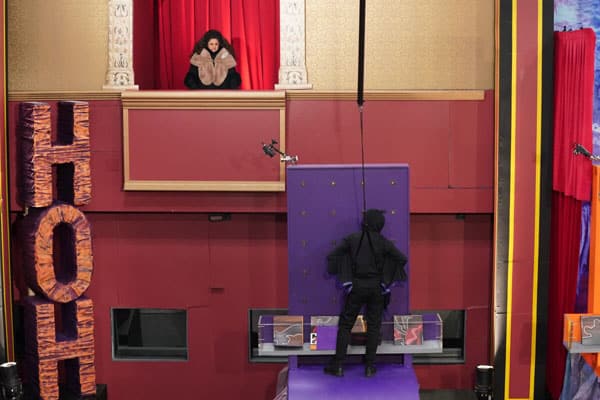 Tonight is the season finale of Celebrity Big Brother on CBS. one of the final five—Dina Lohan, Kandi Burruss, Tamar Braxton, Ricky Williams or LoLo Jones will be crowned the second ever Celebrity big Brother Winner. They have been in the house for 29 days, as per Julie Chen Moonves.

We get a recap of some of what went down this season before we get down to business.

HOH competition! We began in the last episode and the houseguests are still building the posters. Ricky wins and is guaranteed a place in the final four.

We immediately get to the nomination ceremony and find out Kandi and Dina are on the block because, according to Ricky, ‘they don’t sleep with me.’ Uhhhh….ok?

Ricky also talks to Tamar about who they want to get rid of and final two deals. Tamar is giving herself every possible option to win and thinks LoLo should be on the block if Dina or Kandi win POV and use it on themselves.

POV competition. They need to steal items from past competitions without tripping alarms and the one who finishes in the shortest amount of time wins.

LoLo wins the final POV. She talks to Ricky about what to do. She plans to save Dina with the veto, put Tamar up and then have Ricky save her. She also tells Tamar her plan…and Tamar is NOT impressed. Ricky tells Tamar to trust them.

However, in the end, she decides to keep the nominations as is because she isn’t sure who to save.

Julie to Anthony Scaramucci, aka ‘The Mooch’ about his fake game. He admits he almost blew his cover when he was on the block and got the offer to be saved. He was also dying to tell Jonathan Bennett the twist, but had to keep quiet.

He gives his thoughts on the final five and is ever the politician.

He goes to join the other evicted houseguests, despite the fact that he is not allowed to vote.

Eviction time! Each girl gives their reasons to stay before the guests vote one of them out.

We have a tie! Ricky now has to break it. He votes for Kandi, who is evicted. She chats with Julie and joins the evicted houseguests.

HOH competition! It a celebrity lookalike junior competition, in which the junior lookalikes give true or false questions.

Ricky wins after facing a tiebreaker with Tamar. He now has to pick someone to be in the final two with him. He decides to stick with his promise and keep Tamar, which means LoLo and Dina are evicted.

The previously eliminated houseguests come out and Julie fills everyone in on what happened. The jurors then ask a bunch of questions to the final two.

The final two give their final reasons why they should stay. Everyone then puts their keys in to vote for the winner.

Anthony joins him and it becomes a love fest. Everyone shares some favorite moments and he greatest part is the reveal of the Ryan/Joey bromance, followed by the Tom/Kato bromance. Everyone also finds out Tamar had the Power of the Publicist.

Time to see who won Celebrity Big Brother 2! Let’s see who voted for whom.

This is the first unanimous vote since season ten!

Everyone cheers as she goes to greet Julie and her family. She falls as her son hugs her and Jonathan catches her. I think she was happier to see her son than actually winning!

Congrats to Tamar and Tom! As an aside, Tamar’s son is the cutest thing ever!!

Thanks for reading, all!