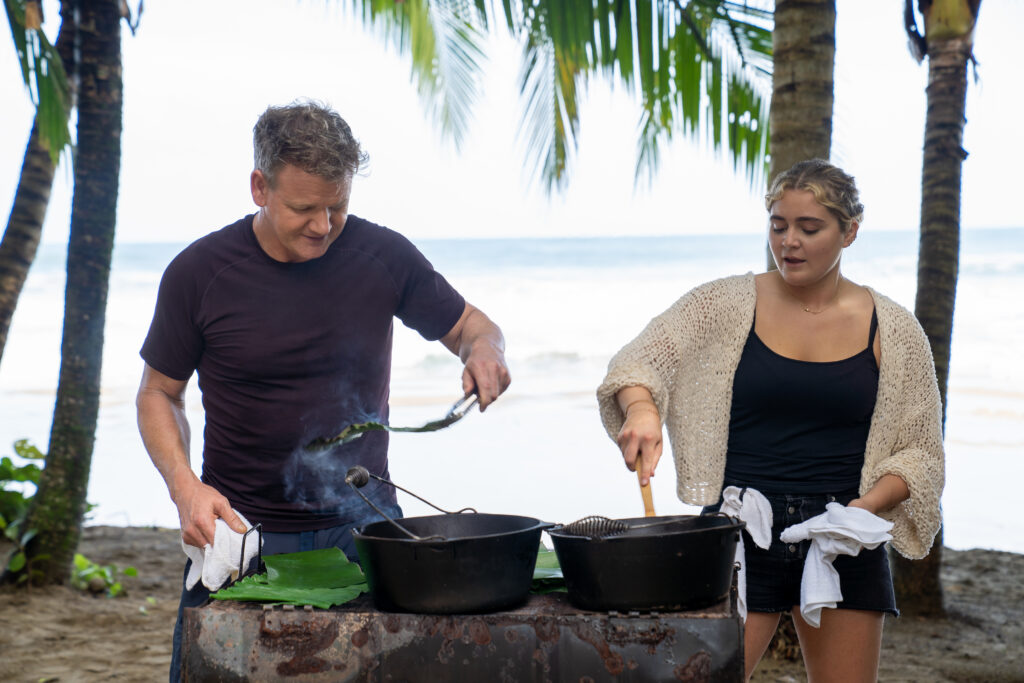 Beginning Monday, July 25, National Geographic is bringing you a sizzling summer as award-winning chefs put their skills to the test in brand-new series GORDON RAMSAY: UNCHARTED SHOWDOWN and WORLD OF FLAVOR WITH BIG MOE CASON.

First, sharpen your knives for three high-stakes culinary battles as multi-Michelin star chef and Ironman athlete Gordon Ramsay faces off against those closest to him, with daughter Tilly Ramsay challenging him in the finale episode to win the locals’ favor in the new three-part series GORDON RAMSAY: UNCHARTED SHOWDOWN, premiering Monday, July 25, at 8/7c.

UNCHARTED SHOWDOWN gets personal as Gordon faces off against UK star chefs Paul Ainsworth and Matt Waldron, who got their starts in Ramsay kitchens before opening their own restaurants. With Paul and Matt working on their home turf, Gordon has to dig deep in the final cooks to prevent his students from becoming the masters. While in Costa Rica, Gordon faces his biggest challenge yet: going head-to-head with his daughter Tilly, the multi-BAFTA Award-nominated CBBC cooking show star and cookbook author, in an epic culinary showdown.

Then, fire up the grill and learn alongside an award-winning barbecue master in the all-new four-part unscripted series WORLD OF FLAVOR WITH BIG MOE CASON, premiering Monday, July 25, at 10/9c. Follow U.S. Navy veteran Big Moe Cason as he leaves his culinary comforts behind and embarks on an epic journey to seek out the most mouthwatering dishes cooked over an open flame.

Champion Pitmaster Big Moe Cason is spanning the globe to connect with new cultures and serve up meals to make the locals proud. He dives for fresh conch in the Bahamas, roasts ‘gator in Louisiana, connects with his roots in South Carolina and braves piranha-infested waters in Colombia. Along the way, Moe explores the many connections between American barbecue and cultures around the world.

Both Ramsay and Big Moe will need to rely on their mastery of their craft as they learn new skills and push themselves to their limits to create dishes that speak to the history, traditions and spirit of the locations they visit. They meet with stewards of fantastic flavors, walk in their boots, learn the impact these dishes have on community bonds, and discover that no matter how difficult the struggles are to reach these locations and learn new techniques, some things in life are worth the extra effort.

—
Episodes of GORDON RAMSAY: UNCHARTED SHOWDOWN include the following:


England’s Jurassic Coast
Premieres Monday, July 25, at 8/7c
Gordon explores England’s rugged Jurassic Coast and discovers culinary secrets buried in his own back garden. He leaps off cliffs for seaweed, milks a water buffalo in order to make mozzarella, and kayaks through choppy seas to pull massive lobsters from the water. With his former protégé, Paul Ainsworth, serving as both guide and challenger, Gordon will have to dig deep in the final cook to prevent the student from becoming the master.

Wales Tales
Premieres Monday, August 1, at 8/7c
Gordon explores the rugged, beautiful country of Wales, from the mountains of Snowdonia, to the storm-crashed cliffs of the west coast. On this epic journey, Gordon flies through the countryside suspended from a helicopter, fishes from a teacup-sized boat, discovers local cheese aged in a mine and harvests seaweed directly from the ocean before facing off against former employee Matt Waldron in a heated cook off.

Ramsay vs. Ramsay
Premieres Monday, August 8, at 8/7c
Gordon Ramsay sends his daughter Tilly and three of her friends on a mission to unlock the secrets of Costa Rican cuisine. The intrepid teens brave snakes and bullet ants while foraging in the jungle, head out into stormy seas for fresh seafood, and discover the secrets of sacred chocolate with the indigenous BriBri people. At the end of the week, Tilly takes all that she’s learned and squares off against her dad in a tropical cook off.

—
Episodes of WORLD OF FLAVOR WITH BIG MOE CASON include the following:

South Carolina Soul
Premieres Monday, July 25, at 10/9c
Big Moe journeys to Charleston, South Carolina to explore the cuisine and its unique connections to Black history and culture. With the help of some local chefs, he learns a new way to make sausage, hunts for oysters, and tries to keep all his fingers while crabbing. But can his newfound knowledge help him create an authentic low country dish good enough to win over the locals at a big-time food festival?

Cowboys and ‘Cue in Colombia
Premieres Monday, August 1, at 10/9c
Big Moe travels all the way to Colombia to discover one of the world’s oldest methods of cooking meat over an open fire. Along the way he visits a street vendor to snack on insects, braves piranha and crocodile infested waters, and at a natural preserve called El Encanto de Guanapalo, seeks knowledge from a group of traditional Colombian cowboys.

Gumbo, Gator, and Grillin’
Premieres Monday, August 8, at 10/9c
Big Moe journeys deep into the Louisiana bayou to discover the soulful flavors of Creole and Cajun food. He hunts gators, uses a bow to catch redfish, welds his own grill, and learns from the best chefs and farmers how to make authentic gumbo and boudin sausage. Can he use his new culinary skills – with a Big Moe twist – to win over the hearts of both Creole and Cajun guests at a local boucherie?

Bahamas Barbecue
Premieres Monday, August 15, at 10/9c
Big Moe explores the culinary world of the Bahamas with Chef Simeon Hall, including diving for conch, sourcing some local cedar wood, chasing crabs on land, and welding his own BBQ from a tire rim and a stool. After learning some of the Bahamian techniques and recipes, Moe cooks up a BBQ feast to share with friends.