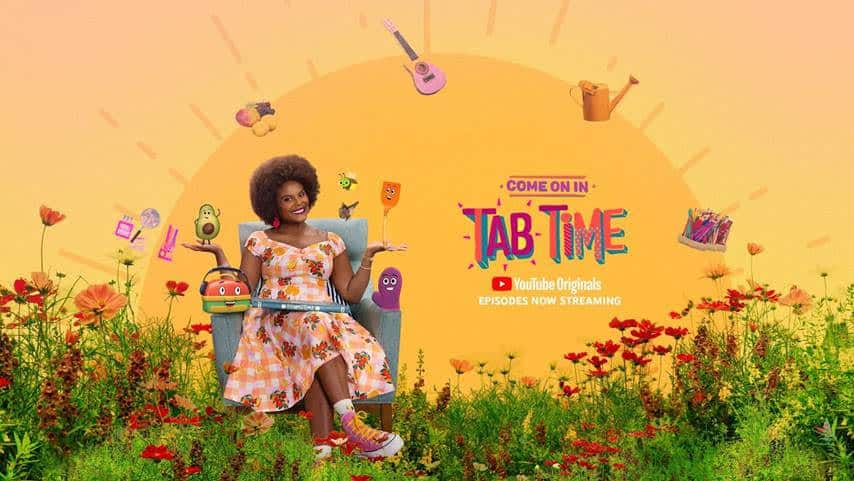 Watch episode 1 titled “How Things Grow” for free now on the official Tabitha Brown YouTube channel and the YouTube Kids app. New episodes are released on the same channels weekly on Wednesdays at 9am PT / 12pm ET.

In “Tab Time,” Tabitha or “Ms. Tab ” as the kids call her, taps into her natural capabilities as a cook, storyteller, mom, and motivational leader, to teach children how to live their best life. Each episode promises a celebrity guest as a Super Cool Expert in Tab’s Lab and two children who join Ms. Tab and DJ Khrafty (Jermaine Fowler) for craft time activities that kids can also do at home.

Episode 1, “How Things Grow,” features guest star Lil Rel Howard as Farmer Seymour Sprouts, who teaches us a special lesson with fruit. The overall theme centers around Ms. Tab and Avi the Avocado’s curiosity about how things grow – from the smallest seed to the tallest tree. Ms. Tab is joined by her friends Burnie the Oven Mitt, Starla the Spatula, DJ Khrafty, and Lovey as she explores how growing and changing makes us feel. So put on your adventure shoes and join in!

Through the lenses of kindness and confidence, “Tab Time” is for all kids, but geared toward ages 3-5, and will explore themes such as family, helping others, music, how things grow, and mistakes. In each episode, Ms. Tab brings the kids along her journey to learn more about that episode’s truth, or theme. With an amazing medley of friends that includes Avi the Avocado (Miles Brown), Lenny the Lightning Bug (Anna Camp), Starla the Spatula (Ashley Nicole Black), Burnie the Oven Mitt (John Michael Higgins), DJ Khrafty (Jermaine Fowler) and Special Adventures voices by Carlos Coleman, Affion Crockett, Nic Few, Zainab Johnson and Lena Waithe, Ms. Tab explores the theme and learns alongside the viewers. Guest stars include Jordana Brewster, Karamo Brown, Percy Daggs, Cynthia Erivo, Cheryl Hines, Lil Rel Howard, Manny Jacinto, Shantira Jackson, Yvonne Orji, Dewayne Perkins and Michael Steger who join Ms. Tab in the series to keep topics dynamic and fun.