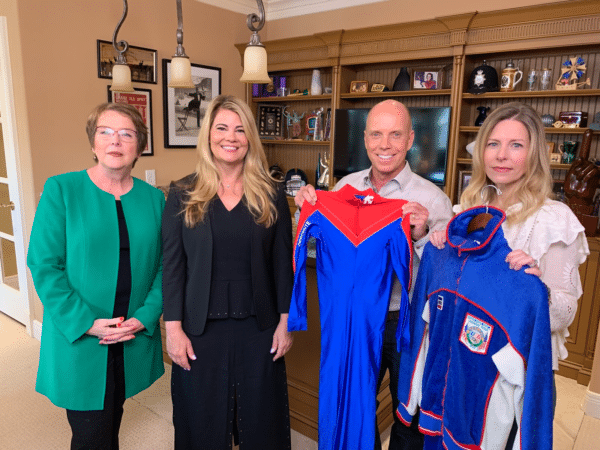 Athlete, author and philanthropist Scott Hamilton is a four-time world champion figure skater, best known for winning the 1984 Olympic gold medal during the Winter Games in Sarajevo and his icon backflips on ice. He most recently released his first children’s book, Fritzy Finds A Hat. He’s also a world-class memorabilia collector, and he shares his treasures with host Lisa Whelchel and certified appraiser Judy Martin in all-new episode of MeTV’s Collector’s Call airing Sunday, February 23 at 9:30 PM ET/PT.

Scott’s home in Nashville, TN showcases his collection of vintage pinball machines as well as guitars autographed by many of rock and roll’s greatest musicians, including The Eagles and Bruce Springsteen. Most of these items were purchased to benefit a variety of charities, including his own Scott Hamilton CARES Foundation. In the episode, Scott is joined by his wife, Tracie, who shares his dedication to charitable organizations and love for music.

Scott also kept a few treasured items from his incredible figure skating career, including the costume he wore in the 1984 Olympics. Click on the link above to see the moment when Scott is shocked to learn the value of the costume.

MeTV’s original series Collector’s Call airs Sundays at 9:30 PM ET/PT. Host Lisa Whelchel (Facts of Life) is back for the 26 episode season to meet with new collector’s across the country who will share their passion for pop culture memorabilia. In this series she meets some of the nation’s biggest collectors of pop culture memorabilia to give viewers an inside look at fascinating and rarely-seen private collections.

His passion and knowledge of sneakers, especially Air Jordans, has led Errick “Unbreakable Kicks” Spencer to assemble an enormous and amazing collection of shoes. The Kobe/Jordan pack and Drake collaboration are just a couple of the gems found in his sneaker vault. Expert Anthony Guzman, a shoe store owner and sneaker collector himself, will size up how much Errick’s collection is worth, and will try to make a sneaky trade.

Al Sorenson is a grade school teacher who also has a second career as a professional artist, specializing in sketches of legendary sports figures which he offers for sale at trade shows throughout the country. Al’s passion as a collector is celebrity-autographed memorabilia, including an autograghed sketch he produced of Michael Jordan. His colleciton also includes a 1980 U.S. Olympic hockey jersey signed by the entire Miracle On Ice team and a 1975 Happy Days script signed by Henry Winkler. Featured in the episode is Scott Ibarra, a sports memorabilia dealer and collector himself who, like Al, is a huge Chicago Cubs fan. The trade item that Scott has brought to Al just happens to represent one of their favorite team’s greatest moments.

Over the past two decades, Jeff Viens has assembled an incredible collection of all things Lego, from vintage 1950s pieces, to modern Star Wars and Marvel-themed sets. Some of Jeff’s prized possessions include a 1958 wooden Lego toy boat; a rare town-plan set from the 1960s; and the world’s largest Lego trebuchet – which he built himself. Joining this episode is Lego store owner and fellow enthusiast, Jim Demer, who will set a value on Jeff’s collection. Jim has brought along a rare space-themed Lego set in hopes of making a trade.

Photographer Mell Bravo didn’t start her Barbie collection until she was an adult, but she’s more than made up for lost time and has amassed a collection of more than 3,000 versions of the world’s most famous fashion doll. Mell estimates she spends $20,000 a year in new acquisitions. She shares some of her prize finds, including an original Barbie from 1959 in nearly pristine condition; the entire line of Golden Dream Barbies from all around the globe; and a vintage coat made for Barbie from real mink (with a market value now higher than a full-size mink for a real person). Featured in the episode is certified appraiser Kate Martin, who will try to tempt Mell into a trade for an extremely rare item not in Mell’s collection: a fully accessorized version of the German doll that inspired Barbie’s creation.

Jim Turano’s love for Elton John started in 1973, when he was nine years old and heard “Crocodile Rock” on the radio. In the decades since, he’s proved himself a superfan by attending over 193 concerts and building an unrivaled collection of Elton John memorabilia. Jim proudly shares some of his rarest and most exclusive pieces, including a Captain Fantastic pinball machine from 1976; handwritten lyrics by Elton John’s collaborator Bernie Taupin; and a spectacular costume jacket (with matching glasses) worn by Elton onstage. Joining the episode is music industry veteran David Ashdown to appraise Jim’s collection – and tempt him into a trade for an iconic item he’s brought from Elton’s personal wardrobe.