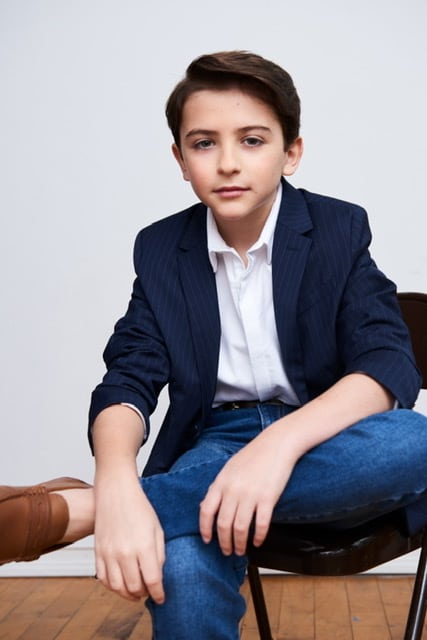 Actor Jack Messina sits down with TVGrapevine to discuss his career, life and future plans.

I started acting when I was 7. I took an acting class near my house just for fun, and I really liked it.  Through that class, I found a manager and started auditioning.  I booked a commercial pretty quickly, and then I was hooked. I knew this is what I wanted to do.

How was our character on Manifest described to you?

I was given a description of the character as a bright kid with a terminal illness who has a twin sister.  After a fateful flight home, he may be in the grip of mysterious forces beyond human understanding.  I had no idea what those mysterious forces would be or how I would act them out.

What were some challenges of playing the role?

Some of the challenges of playing Cal are really understanding what he’s feeling during a calling. Sometimes he’s scared, sometimes he’s calm and understanding, like he knows what it’s all about.  One time, he spoke a foreign language.

What were some stand out moments from filming?

The stand out moments are when we all do a scene together. I love it when the whole cast is there and working together.  We have a lot of fun.

Were you familiar with any of the cast before joining the show?

I was not familiar with the cast before the show, but I did Google them so I wouldn’t be the only one who didn’t know who they were.

Did anyone give you advice that you took to heart while filming?

I get a lot of encouragement on set. Everyone is very supportive of each other, and since I’m the only kid on set, everyone watches out for me.

What are some other things you’re working on?

Right now, filming is over for season 2, so I’m going to school and doing kid stuff. I still go on auditions and do press stuff for the show.

What are some of your future goals?

I want to keep acting and hopefully do movies and different types of roles.

I love to ski. I go almost every weekend in the winter.

What are you watching on TV?

I started binge-watching the Simpsons.

It’s a great time to be an actor. There’s so much in production and so many media outlets. I am incredibly lucky to be on such a great show at my age. Thanks for watching Manifest.

Surprise
%
About Sammi Turano 4706 Articles
Sammi has been a journalist for over a decade, specializing in entertainment, lifestyle, sports and celebrity news. She is the owner of TVGrapevine and Football in High Heels and the Host of Grapevine in High Heels With Sammi.