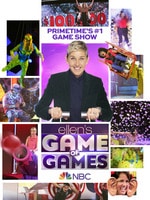 “Ellen’s Game of Games” includes supersized versions of the most popular and action-packed games from DeGeneres’ award-winning daytime talk show, “The Ellen DeGeneres Show.” Contestants are pulled from the audience and must maneuver massive obstacles, answer questions under crushing time pressure and face gigantic plunges into the unknown – all in a quest to win a big cash prize.

In addition this season, DeGeneres has convinced several of her celebrity friends to join in on the fun.

Every episode will feature DeGeneres’ mischievous personality along with a raucous roster of games, including familiar favorites “Blindfolded Musical Chairs,” “Dizzy Dash” and “You Bet Your Wife” as well as some big and new additions for this season that include “Mazed and Confused,” “Runaway Bride,” “Dirty Laundry” and “Buckin’ Blasters.” The high-pressure moments and unexpected results will keep audiences on the edge of their seats.

Contestants play different games over four rounds. The winner of each round advances to play “Know or Go.” The winner of “Know of Go” gets the chance to play an epic game of “Hot Hands” where they have to guess as many answers as they can in a designated amount of time.

Warner Horizon Unscripted Television and A Very Good Production in association with Telepictures.