In honor of tonight’s premieres of MURDER IN THE HEARTLAND AND MURDER UNDER THE FRIDAY NIGHT LIGHTS, we have an exclusive interview with EP Ron Simon about both shows. The shows will air at 9pm and 10pm EST, respectively.

What can we expect to see on MURDER IN THE HEARTLAND AND MURDER UNDER THE FRIDAY NIGHT LIGHTS this season?

The award-winning series “Murder in the Heartland” is digging deeper into small towns that were affected by murder. These crimes have left scars on these communities and they are being presented as they never have been before. The second season of “Murder Under the Friday Night Lights” exposes the world around sports in small-town America. From the bonds of friendship to the intense crosstown rivalries to the identity crisis in a community struck by tragedy, this sophomore season expands on the idea that what happens off the field is as powerful as what can happen on game day.

What are some of the biggest challenges of working on the shows?

One of the biggest challenges working on these true crime series is the emotional impact of the stories. When a murder happens in small towns, it can lead to a lot of reflection and coming to terms with hard truths that many people don’t want to speak about publicly. Our production teams work extremely hard to earn the trust of families, neighbors, and community members to make sure we bring a true 360 view of these cases that changed the lives of so many forever. 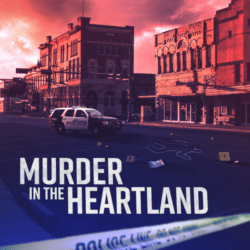 How are the featured cases chosen and what kind of work goes into each episode?

Choosing which cases we feature takes a lot of research. We need to ensure that we have willing participants to tell them.  Sadly, there is no shortage of stories to tell, but we always want to ensure we share them in a compassionate and thoughtful manner.

Which episodes are you most looking forward to everyone seeing and why?

I’m very interested to see how the audience reacts to the deeply personal stories featured in the new season of “Murder in the Heartland.” There is also an expansion of stories that we’re profiling on “Murder Under the Friday Night Lights” this season, as we profile the murder of NFL player Darrant Williams and a case that revolves around a former Penn State football player.

As a producer, how do you prevent yourself from getting emotionally invested in each case?

It’s very difficult to not get emotionally invested in each story – these are the most tragic moments of people’s lives, so that is definitely something that stays with you.

What was one stand-out moment from each show this season?

This season of “Murder in Heartland” is so well done.  Each story is gripping and heartbreaking in its own right. For  “Murder Under the Friday Night Lights,” we tell the story of a little girl’s murder, and the bravery of her parents to re-live the tragic event is something that I will never forget.