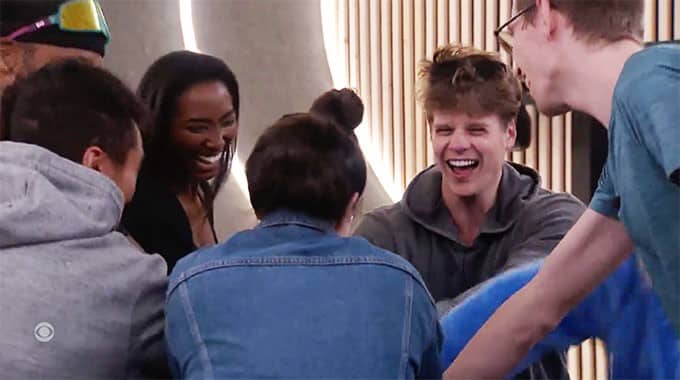 CBS’s Big Brother 24 (aka the POV week 3) picks up right where we left off with the nomination ceremony. Brittany is upset about being on the block, while Nicole wants to find a way to get rid of Taylor–even if it means going on the block herself.

Taylor is thrilled to go on the block and plans on playing in the POV competition–and winning to ensure her safety.

Ameerah and Nicole talk to Turner about getting rid of Taylor. He thinks this will be the best way to end his reign without getting too much blood on his hands. Nicole now hopes she and Taylor are NOT in the POV competition because she doesn’t want to throw said competition. She also hopes to get on the block to get whatever power was promised and to get rid of Taylor.

Taylor and Monte have a deep conversation about colorism, which is incredibly eye opening.

Monte, Kyle, Turner and Joseph suspect there is an all girls alliance in the house and think that since they don’t like Taylor, she can join their alliance. Now the plan is to backdoor Ameerah. They now have their alliance called The Pound.

Taylor and Nicole join Jasmine and Turner and Michael and Brittany in the POV competition. Before they can compete, Nicole breaks down and talks to Daniel. She ends up blaming Taylor for everything.

Taylor sees her bestie crying and goes to talk to her, saying that if she wants to bow out it is okay. Nicole gets angry and thinks Taylor wants her to quit.

Daniel gets wind of this….and goes off on Taylor. Out of respect for Taylor and her loved ones, I will not repeat what happened or what was said. Taylor, for her part, kept her composure despite being upset hand shaken up by the incident.

POV comp time. Jasmine passes out and cannot compete, so it is only Nicole and Taylor and Brittany and Michael in the competition. They must build a puzzle on top of a tree. One is doing the building while the other gives directions from the ground.

Nicole and Taylor have trouble working together, which gives Michael and Brittany an easy win.

Michael, Joseph, Brittany, Monte, Kyle and Taylor form a new alliance called the Leftovers. Joseph and Kyle also say they are sick of the way Taylor is being treated.