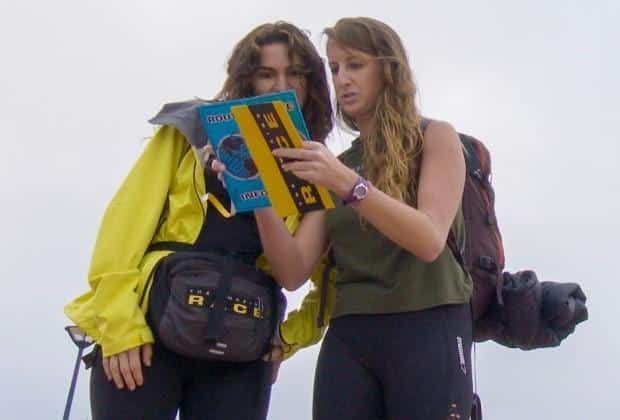 Tonight is the finale of CBS’s The Amazing Race. Four teams remain and head to Libson for the penultimate leg of the race.

After finding a statue of Jesue Christ, they head to Fortaleza de São Filipe. The teams must complete two roadblocks during this leg.

Ryan and Dusty get lost, but are able to gain ground. Kim and Penn are in first place and get to the roadblock. They must pick a boat with the name of an explorer and row it to their next clue.

Kim chooses one at random and ends up getting it correct. She gets the next clue, which requires the teams to paint a sardine can on a door.

One by one, the teams catch up. Ryan and Dusty and Arun and Natalia struggle with choosing the correct boats, but eventually catch up.

Ryan and Dusty struggle with the painting challenge by missing a very obvious clue. However, after the tenth attempt, they get it correct.

Cayla and Raquel leave their map behind and have to go back to get it.

Penn and Kim are in first place, but struggle at the second roadblock, which has them counting the columns on two wings of the buildings. Penn struggles, but finally gets it after several tries.

Cayla and Raquel on the other hand, get it on the first try. They head to the lighthouse and are team #1. They are in the finals and won a luxury trip.

Penn and Kim are not far behind and become the second team to check in.

Dusty and Ryan catch up and become the third team to check in.

Sadly, Natalia and Arun are eliminated due to checking in last.

The final leg has the teams heading to LA! Once there, they head to the Westin and have to find the combination for a lock to get the next clue.

Cayla and Raquel and Kim and Penn get it right away, while Dusty and Ryan struggle. The two of them finally figure out and must rush to catch up.

The next task has one team member smash pinatas blindfolded while their partner guides them. Each one has a clue.

All the teams struggle, but are able to find the three hidden clues. They then head to a studio, where they must do a Foley technique on memorable TAR moments.

Cayla and Raquel struggle, but finally do it correctly, leading them to the next clue at the Dignity Health Sports Bar. Kim and Penn aren’t too far behind. However, things take a turn when traffic gets in their way.

Once the teams arrive, they must play an intense game of memory based on the race.

Cayla and Raquel are the first and use sayings to help them. However, they keep missing two of them and second guess everything.

Kim and Penn rely on her picture diary for theirs. They also run into hiccups, but make it to the end and WIN THE AMAZING RACE!

After a few struggles, Cayla and Raquel finish and end up in second place.

Dusty and Ryan end up in third, but are grateful for the experience.

Congratulations to all the couples.