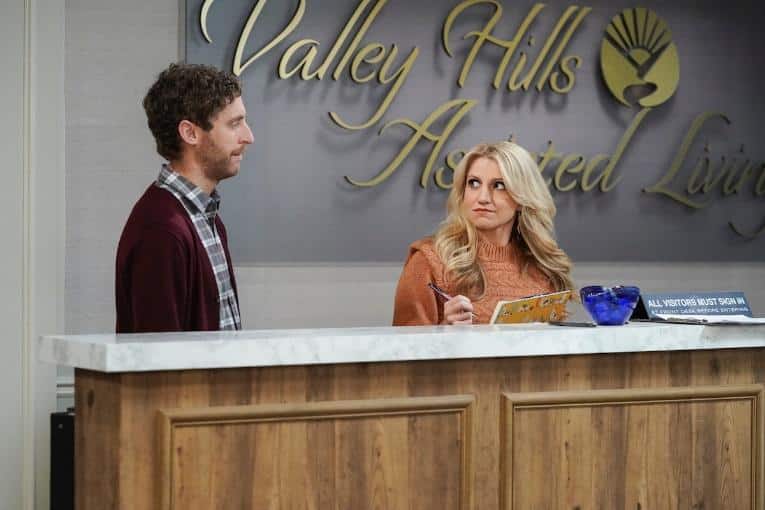 ICYMI: B Positive Recap for Juneau, Froyo, and Ronald Reagan

The season finale opens with Gina giving Bette, Spencer, Norma and Irene their mail. Spencer makes fun of a letter from his grandson, while Norma complains about her medical bills. Irene tells her that she should throw it away so they go after her daughter when she dies.

Drew goes to visit Gina and ends up scaring her. He returns his ID badge and tells her about going to Alaska. As they talk, Asher comes and blows their O’Bama cover. He gives Gina an offer to buy Valley Hills, but she refuses, despite the fact that he offered her a LOT of money. She says taking care of everyone is what gives her life purpose. He thinks she is making it up and gives her time to think. After he leaves, she counts the zeros on the offer.

Drew, Althea, Gabby and Gideon want to know what happened, so she fills them in. Althea wants her to sell, but Gideon points out that people will just be numbers. She is still torn on what to do.

That night, Drew, Bert, Harry, Jerry and Spencer bond over a fire and drinks. He tells them about his trip. Spencer thinks nature will win, but Harry thinks he can handle it. Bert realizes Juneau is in Alaska and finally laughs at the Jeanau knock knock joke Drew opened with.

Asher calls Gina to offer her more money, but she still refuses. He retaliates by offering better offers and money for his residents. She promises to top that, but is still worried.

Gina runs into Peter, who says he is having dinner with his sister Lisa. She says she thought Lisa died, so he says it is a friend who is like a sister. She approaches the dementia again, which leads to them fighting.

That night, Gina says nobody moved out and presents the residents with a frozen yogurt machine. However, the residents tell her they are offering six months free, which upsets her even more. The residents feel bad because she is in tears. However, Irene decides to go back.

Drew goes to comfort her and reminds her that it isn’t over until the fat lady sings. She says that is body shaming, so he amends his statement. He offers to stay, but she assures him that she is fine and hugs him goodbye. He thanks her for saving him, but she says he saved hers.

Later on, Gina is enjoying a glass of wine. Peter comes in to apologize and tells him about her father the saxophone player who lost his skills due to dementia. He admits he is scared and agrees to take the cogitative test. Gina promises to be there for him no matter what.

The gang gets together and discuss whether they should stay or go. Bette says she has to go where her son tells her, so Spencer agrees to go with her. Irene makes a snarky comment about her and says those who are staying are stupid.

Drew comes in and thinks it is a surprise party. They fill him in on their plans, but he reminds them of everything Gina has done that they can’t get at Golden Horizons. They all decide to get together with the staff and stay because of they love her. This leads to her ugly crying.

The episode ends with Bette saying her son is making her move to Golden Horizons. Spencer is upset, but Irene tells him he won’t be alone.

Gina talks to Norma and decides to go after Drew…only to find out he is gone.