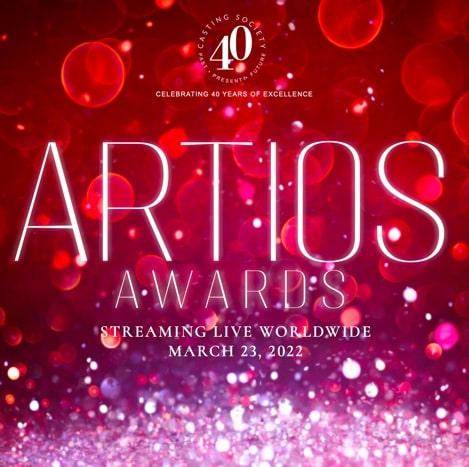 Casting Society honored excellence in casting across feature films, television and theater tonight at the 37th Annual Artios Awards at its worldwide virtual ceremony which also was a celebration of the organization’s 40th anniversary. Actress and creator Danielle Pinnock (CBS’ Ghosts) hosted the star-studded award ceremony, which included a congratulatory message from Steven Spielberg to his Casting Director for “West Side Story.”
A red carpet experience pre-show, hosted by former ET Correspondent Natasha Garguilo and “The Working Actor” host Rodrigo Recio, kicked off the festivities live via YouTube. The award show began with a 40th anniversary video consisting of interviews with past, present and future members talking about what the anniversary means to them and a celebration of the magic of theater. Pinnock welcomed the virtual audience with her signature brand of humor and Ariana DeBose began the presentations. Highlights of the ceremony included the Associate Spotlight Award to casting associates Kimberly Ehrlich and Xavier Rubiano, and the Zeitgeist Award to “Spider-Man: No Way Home,” given to a popular film. The Virtual Theater Award replaced the theater categories for this year only and will return in 2023.
The star-studded list of presenters and special appearances tonight from award-winning series and films included Steven Spielberg, Director, (“West Side Story”), Brian Cox (Succession), Ariana DeBose (“West Side Story”), Toheeb Jimoh (Ted Lasso), Troy Kotsur (“CODA”), Ally Sheedy (Single Drunk Female), Chris Sullivan (This Is Us), Aristotle Athari (Saturday Night Live), Sofia Black-D’Elia (Single Drunk Female), Eugene Cordero (Loki),), Lee Daniels, Director, (The United States vs. Billie Holliday), Andra Day (The United States vs. Billie Holliday), Brittany O’Grady (The White Lotus), Moses Ingram (The Queen’s Gambit), Rob Morgan (“Don’t Look Up”), Temuera Morrison (The Book of Boba Fett), Lou Diamond Phillips (“Easter Sunday”), D.J. “Shangela” Pierce (RuPaul’s Drag Race), Saniyya Sidney (“King Richard”), Adam Rodriguez (“Magic Mike/Magic Mike XXL”), among others.
“We are so excited to honor these immensely talented, creative and hard working casting directors tonight,” said Casting Society President Kim Williams. “What a wonderful way to begin Casting Society’s 40th year by celebrating these extraordinary casting directors’ invaluable contributions to the entertainment world.”
Host Danielle Pinnock said in a statement: “It was a tremendous honor to be asked to host this year’s Artios Awards. I’m still pinching myself! To be able to celebrate these industry titans is a gift I won’t soon forget. I have always been so inspired by the endless creativity and passion that casting directors exhibit: in giving actors a platform to share their gifts; and in helping creators achieve their vision by bringing together a perfect ensemble of performers. I want to thank the Casting Society for this incredible opportunity, and congratulate all the winners and nominees, past, present and future!”
See below for a full list of winners: