In Pursuit With John Walsh: Carlos Torres and Bill Brockbrader

Elevia Vigil was an aspiring photographer who hailed from Mexico. She came to the USA in hopes of becoming a citizen and living the American Dream.

However, on June 22, 2014, her lifelong dream came to a tragic end when she was brutally murdered.

Her sister Karina recalls that fateful morning. Their mother Blanca told her to go wake Elevia up for work, but there was no answer. Karina assumed she was ignoring her, so she went back to sleep.

Later on that day, the both of them went to check in on her, only to be met with silence. They noticed the AC unit and curtains were off the window, so they broke in to find her dead. She was nude, bruised and suffocated.

Investigators take a look around and realize Carlos Torres, Elevia’s boyfriend, was involved. Karina had seen his car in the driveway the night of the murder and just assumed they were hanging out. When he was gone the next day, she figured he had gone home.

Authorities want to question Carlos, but he tells them that he is eating and watching football, so they need to talk to him later. They are shocked that he is reacting this way over his girlfriend’s death.

That night, he confirms he was with Elevia that night for dinner and drinks, but the timeline doesn’t add up.

More details emerge, claiming that Carlos was controlling and abusive. He even threatened her after their breakup.

The two of them decided to talk….on the day of the murder. 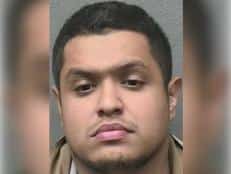 Carlos is questioned again. His story changed in terms of the timeline and authorities are concerned over the fact that he had no feelings over the murder….even though they were engaged.

As the investigation continues, they discover that his alibi is false. He contacts his friend Edder, who confesses that he knows that Carlos killed Elevia after discovering pictures of another male on his phone.

Carlos is found in December and put in jail. His family is able to get him out, under the condition that he wears an ankle monitor. He is also given a plea deal of 60 years in jail.

However, he is soon on the run after cutting off his ankle monitor. He disappeared on February 15th, 2015. He took his dad’s vehicle and abandoned it while on the run. He was last spotted by the Texas/Mexico border and possibly crossed the border.

Karina is terrified he might come back and hurt the family or might use his charm to harm someone else.

John gives information on Carlos, last seen in Larado, Texas. He is 5’7″, 180 lbs with brown hair and brown eyes. He has a tribal tattoo on his right shoulder and skills as an electrician. He also likes nice cars and is possibly getting support from his family.

Claude Edsel Brooks is wanted for the murder of an right month old baby in LA.

Seven year old Hanna Lee and five year old Skye Rex were last seen on March 17, 2020 in Waynesboro, PA. They are believed to be with their mother Lashada Lee, who allegedly abducted them after a custody battle, It is possible they are in Maryland or Washington, DC.

Throughout the years, he is arrested and held in prison, the whole time refusing to register as a sex offender. He has not been seen since March 2015.

Callahan Walsh interviews US Marshalls involved in the case, as well as his ex-wife’s family to paint a picture of Bill’s life. His ex-father in law talks about the abuse his younger daughter faced at the hands of Bill. (out of respect for the victim, I won’t go into details.) 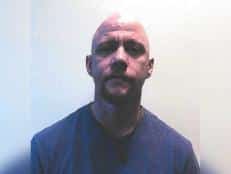 It is also revealed that Bill’s wife Tana is also a victim of his abuse, as were some of her friends. Once she was told exactly what was going on, she went back to Utah and found out more disturbing details about his actions. (Once again, out of respect for the victims, details will not be revealed.)

As Tana discusses details about Bill, it is discovered that he was abusing more victims and putting out videos about the accusations against him, as well as lies about his military career.

He even goes as far as to blame his victims for everything. The victims who have seen the videos and accusations call it a slap in the face as she recalls the painful memories of the abuse.

Bill is now on the run and has been for the past six years. He is 6’5″, has green eyes and is about 175 lbs. He also has a lot of tattoos, frequents strip clubs and may use the alias Bill Wood.

Luis Rivas Clase is involved in two attempted murders, one in PA and one in the Dominican Republic. involving baseball player David Ortiz.

Hannah Dashnaw-Wisherd was last seen February 4, 2021 when she was dropped off at the Missoula Children’s Theatre in Montana. She was there to catch a bus to work, but never arrived, nor did she arrive home. It is believed that she is with adults and her appearance has changed.

Anyone with information on these cases can call 1-833-378-7783 or visit www.inpursuit.com. Every call is guaranteed to be anonymous.

Surprise
%
About Sammi Turano 4564 Articles
Sammi has been a journalist for over a decade, specializing in entertainment, lifestyle, sports and celebrity news. She is the owner of TVGrapevine and Football in High Heels and the Host of Grapevine in High Heels With Sammi.