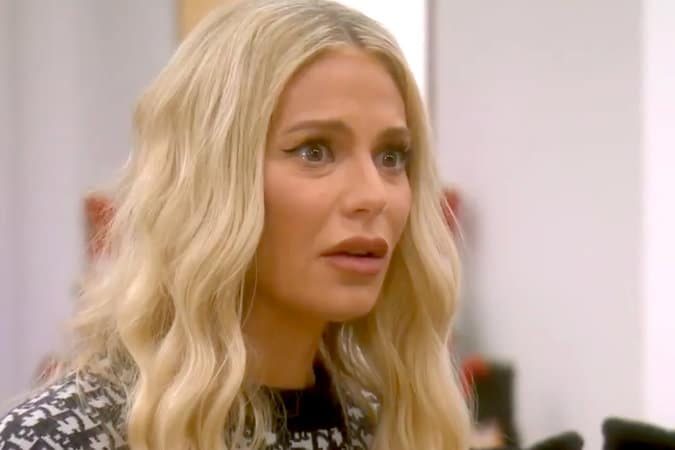 The Real Housewives of Beverly Hills Recap for Circle of Distrust

This week’s episode of Bravo’s The Real Housewives of Beverly Hills picks up right where we left off with the Garcelle and Erika misunderstanding.

Lisa comforts Erika and says everything is messed up because of Garcelle, who wants to leave. Kathy convinces her to stay and talk things out.

Kyle thinks there is more going on because Erika looks so broken.

Garcelle apologizes to Erika and they hug it out.

Sutton thinks this is all odd and wonders if Erika is telling the truth.

Erika decides to leave. As Kyle, Lisa and Dorit walk her out, Sutton and Crystal tell Garcelle that she didn’t do anything wrong. Garcelle says everything just feels divided at this point.

After Erika is gone, the ladies continue to talk about the situation. Lisa attacks Garcelle and asks her why she brought up the subject of Tom calling.

Crystal once again tries to defend Garcelle, but Dorit acts like she doesn’t believe her.

Crystal and Garcelle leave for the hotel. After they are gone, the topic continues and they decide Erika should not be asked anything else. (Sammi thought: Where the heck was this during LVP and Denise’s issues? They acted like the two of them murdered someone over dogs and lesbian affairs, respectively, but Erika was involved in much worse and lying to their faces.)

Lisa decides it is time for dinner, so they all dress up and order food. When they all get back together, Lisa continues to attack Garcelle and tells her to own her behavior with Erika.

Garcelle says absolutely not, she did nothing wrong and that Lisa can shove it. Lisa thinks Garcelle likes to hurt people. (Sammi thought: Lisa has some nerve with this, considering her behavior last season. Also, Garcelle didn’t upset Erika on purpose and she apologized. What more was she supposed to do?)

The topic switches to the seeing color debate and how people aren’t equal. Kathy explains how she was friends with Michael Jackson and they agreed that they don’t see color, not realizing how that could be offensive.

Garcelle explains how she worries about her sons and the world not seeing their value due to their race.

Dorit brings up the fact that her kids were raised with and love people of color. Garcelle questions if they work for her and Dorit tells her that they are also family friends and she should know that since she has been to her house.

They decide to relax in the living room with snacks and pajamas. Lisa says Harry has acrylic nails and shows them a picture.

A TURN IN EVENTS

The next morning, the ladies get an article about the allegations about Tom and Erika, including how money for orphans, widows, burn victims and other clients went to their lavish lifestyle. There is even news about how EJ Global got money, which they realize is Erika’s company.

Sutton explains that it is a Ponzi scheme and how Erika can go to jail or at least be in trouble because her company received money from the firm. Tom would obviously go to jail as well if he is found guilty.

Everyone continues to discuss what is happening. Lisa understands how Erika might not have known and signed the papers Tom gave her, but everyone else is beginning to question everything they were told. They wonder if they even know her at all.

MEETING OF THE MINDS

Later on, everyone goes home to their old lives. Kyle being attacked by her pups is adorable. Even though they just left each other, they plan to meet to talk without Erika.

At the meeting, they talk about Erika posting about Tom’s mistress on Instagram. Kyle thinks Erika needs to be more open and the posts are to show the divorce is for real.

Garcelle tells them that Erika initially said there was no affair and begins to question things.

Sutton thinks something is amiss and that nothing adds up with Erika’s stories. She is not sure she wants to be around her at this time.

Boy George’s snark about Erika cracks me up.

Why is Sutton wearing heels with her pajamas?

Sutton asking her dog about Erika was epic.

Dorit’s daughter saying that she made cookies was so cute.

Something about them making the meeting into a Christmas party is hilarious.