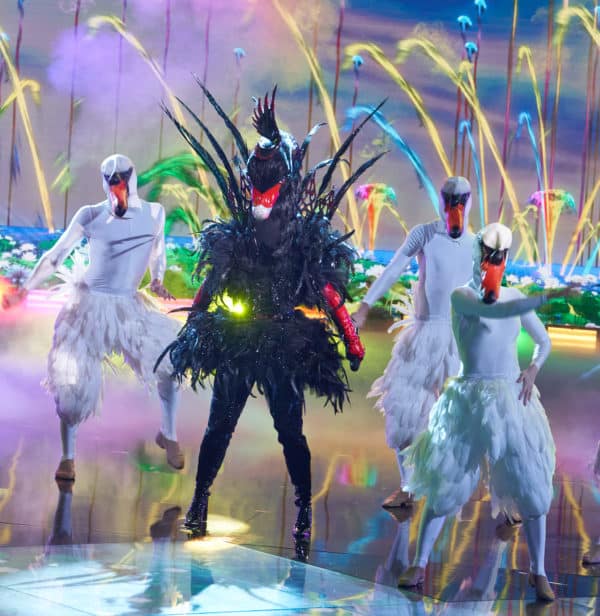 Tonight’s episode of Fox’s The Masked Singer features the Group B finalists, along with another wildcard. Niecy Nash is hosting, while Robin Thicke, Dr. Ken Jeong, Jenny McCarthy and Nicole Scherzinger judge.

She sings How Will I Know by Whitney Houston. The performance starts off slow, but ends up being energetic and fun, especially with the backup dancers. The judges declare her a front runner, and I completely agree. Some of the clues are confusing, but I am kind of leaning toward Jodie Sweetin because she had to do post-Full House auditions under a different name (according to her book UnSweetined) and the tens could represent her time on Dancing With The Stars.

The Men in Black bring out a unicorn, which symbolizes a friend of her who passed away.

He sings 7 Years by Lukas Graham and WOW! It seriously brings tears to my eyes. It is such a moving, beautiful performance that I think he is going to make it to the finals. I think it is Nick Lachey, but the roast/lock-up clues is completely throwing out. The judges love him so much, especially Jenny, who is tears.

The Men in Black is a chain with two dog tags and the letter P.

Clues: Cooking, being in trouble, mac and cheese

He sings Give it to Me, Baby by Rick James and seems to have a lot of spirit and fun in his performance. He does very well, but seems to be out of breath by the end. In fact, he ended up having to go off-stage to cool off. I hope he is okay! As for a guess, the cooking one makes me think of Snoop Dogg,

The Men in Black clue is a bowler hat, which represents his admiration for Sammy Davis, Jr.

He sings Hip Hop by Dead Prez. The performance has everyone on their feet and dancing. I am impressed with him, not only because of the performance itself, but the swag. The judges are also impressed and want to party with him. I am trying to think of someone who is famous for martial arts and also a dad, but the only person coming to mind is Jason David Frank, because he is also big into doing comic cons.

The Men in Black clue is hot wings, which represents his love of cooking.

Clues: Fending for himself, football, Super Bowl, being a softie, B99

He sings Candy Girl by New Edition and the voice sounds so familiar….but I cannot place it. I also love the old school dancing, which makes me think it is a football player who had his heyday back in the nineties. The judges agree that he just shook up the competition.

The Men in Black clue is a sign that says ‘Live from New York, it’s Saturday Night!’

Niecy Nash decides who goes home instead of relying on the vote tonight.

She decides that the BULLDOG is going home…..and his identity is…….NICK CANNON!!! He thanks Niecy for filling in and being his queen….but jokes about her kicking him off his own show.

Nick will be back hosting next week, stay tuned!