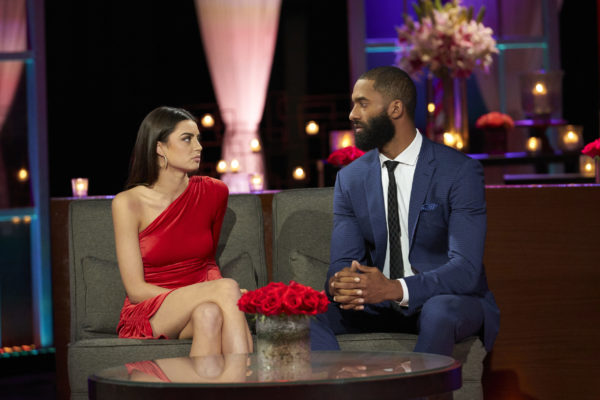 THE BACHELOR - ÒThe Bachelor: After the Final RoseÓ Ð On-air personality and bestselling author Emmanuel Acho hosts an emotional and impactful evening featuring touching reunions, heart-wrenching confrontations and powerful one-on-one talks with the final women as well as the Bachelor himself, Matt James. Plus Ðjust when you thought the twists and turns were finished Ð a shocking announcement that will have Bachelor Nation talking, all on ÒThe Bachelor: After the Final Rose,Ó MONDAY, MARCH 15 (10:00-11:03 p.m. EDT), on ABC. (ABC/Craig Sjodin) RACHAEL, MATT JAMES

The season finale of ABC’s The Bachelor begins with Matt being reunited with his mom Patty and brother John. After they spend some time catching up on everything, they get to meet Michelle.

The three of them get along very well and Michelle has no problem telling either one of them that she is falling in love with Matt. They seem to take to her as well, however, it seems like they barely had any time together before they said goodbye. I wish we would have gotten more time with them.

Rachael goes to meet his family next, bearing a bouquet of sunflowers. He tells her to be herself before bringing her in to meet them. Both John and Patty talk to her, but they don’t seem as enchanted with her as they did with Michelle. However, they do hug her goodbye at the end of the day when she leaves with Matt.

Latrer on, he talks to Patty and John, who both tell him that they support any decision he makes, but he has to make sure he does what is right for him. While it may be comforting knowing he has their support, he leaves feeling more confused than ever, especially when Patty talks to him about what happened between her and her ex-husband.

Chris Harrison meets with Matt, who tells him about his conversation with the family. He isn’t sure what he wants to do, so Chris lets him vent about his confusion and tells him they will figure things out. He asks questions, but lets Matt talk without offering any unsolicited advice or pushing him to pick someone.

Michelle and Matt have their last chance date, which has them rappel a building to get to a picnic lunch. The two of them have another relationship conversation with Michelle pouring her heart out and Matt being more confused than ever.

That night, the two of them canoodle and talk some more when she presents him with a special World Changing Warrior jersey with Mr. James and the number one on the back. She also has one for herself, which has Mrs. James and the number two on the back. She once again declare her love for him, but he breaks up with her, leaving her blindsided and brokenhearted. She is in tears as they say goodbye for the final time.

He leaves her room and paces around outside when Chris finds him and asks if he is okay. Matt says he isn’t and tearfully reiterates what happened with Michelle. He talks about what his mom said and admits he didn’t want to rush into something he wasn’t ready for, like his dad did with his mom. He leaves, wondering what he is going to do now.

Rachael gets ready for her date when Chris comes over to tell her that Matt had a rough night and the date is canceled. She is upset and wonders if she even has a chance with him anymore.

Matt, for his part, continues to wonder what he should do when Neil Lane comes by to help him pick out a ring. Even though Matt is still confused, he picks out a ring to hold onto, just in case.

The next morning, Rachael gets a note from Matt to meet him. As she gets ready, Matt has one last heart to heart with Chris and tells him he will know what to do when he sees Rachael.

When Rachael arrives, he tells her he loves her, but is not ready to propose. They decide to commit to dating and he gives her the final rose. They go off into the sunset via horse and carriage.

The third hour kicks off with Emmanuel Acho filling in for Chris Harrison. He addresses the controversies with Rachael and Chris, saying they will discuss that later.

Michelle is called to the stage, saying she is ready to face Matt and talk to him about everything. She says that she wanted to talk to Matt, but he refused to take her call.

Emmanuel then asks her about Rachael and Chris. She thinks Rachael has a good heart, but there is a lot to learn. She also thinks it was inconsiderate. She says she is exhausted by everything that has been going on.

Matt comes out and Michelle calls him out on how she felt when he ghosted her and denied her calls. He says he is sorry and tells her that she is amazing, a breath of fresh air and if he could do it over again, he would have talked to her.

Emmanuel asks if she still loves him and she says she cares for him, but not in love. She does, however, appreciate that his feelings are real. She hopes he finds love, learns to kiss with his eyes closed and says something other than thanks for sharing in conversations.

Matt then talks about being the first black Bachelor and the pressure that went along with it, especially with what was going on in the country at that time. He also gets into finding out about Rachael’s controversial past and apology. He goes on to say there is a lot of work to be done and he looks forward to seeing it get done, especially when she can’t understand what it is like to be black in America.

MATT AND RACHAEL ARE NO LONGER TOGETHER!

Matt still cares for her and hopes she continues to learn and do better, even though the actions happened three years ago.

Rachael comes out next and Emmanuel questions her about the pictures and accusations.

She apologizes for her actions, saying she had no idea that they would one day cause so much trauma. She says she is learning every day and taking actions to be better and do better.

Matt joins her on stage and he can barely look her in the eye or talk to her. It is obvious he is still very hurt and upset over what happened between them. He finally says it was hard to have to explain to her why it was problematic and she could never understand what it is like to be in his shoes. Therefore, he cannot be in a relationship with her. They wish each other well and go their separate ways.

Katie and Michelle are BOTH the Bachelorette with them each getting their own season. Stay tuned to see their journeys!