Lifetime just announced that it will be airing Harry & Meghan: Escaping the Palace, adding to its special series on the former royal couple. Check out more details below.

Royal no more…With the monarchy at a crossroads following the shocking, bombshell tell-all interview by the former Duke and Duchess of Sussex,  Lifetime expands its global Harry & Meghan franchise with a third movie, Harry & Meghan: Escaping the Palace, revealing what ultimately lead to the couple’s break from the royal family. Casting is currently underway with production set to begin this spring for a worldwide debut later this year.
Harry & Meghan: Escaping the Palace is the third edition of Lifetime’s Harry & Meghan movie franchise which includes 2018 hit movie, Harry & Meghan, following the love story of newlyweds Prince Harry and American actress Meghan, and 2019’s Harry & Meghan: Becoming Royal which pulled back the curtain to reveal the untold joys and challenges of life inside the Royal Family during their pivotal first year of marriage. 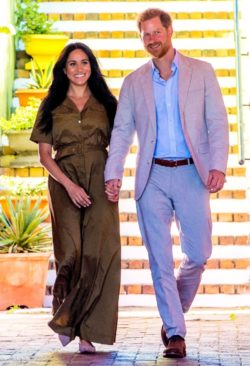 Harry & Meghan: Escaping the Palace reveals what really happened inside the palace that drove Harry and Meghan to leave everything behind in order to make a future for themselves and their son Archie. The movie will detail Meghan’s growing isolation and sadness, their disappointment that “The Firm” was not defending them against the press’s attacks and Harry’s fear that history would repeat itself and he would not be able to protect his wife and son from the same forces that caused his mother’s untimely death. Harry & Meghan: Escaping the Palace will also reveal the private family feuds between Will and Harry, Kate and Meghan, and Harry with Will and Charles, that lead to the ultimate break from the royal ties.
See also  Food Network Announces Cast For Worst Cooks in America: Celebrity Edition

Harry & Meghan: Escaping The Palace is executive produced by Merideth Finn and Michele Weiss. Menhaj Huda will direct from a script by Scarlett Lacey.

A+E Networks holds worldwide distribution rights to the three-film Harry & Meghan franchise.
Lifetime, a leading producer of television movies worldwide, currently has the top two original movies on cable in Calendar 2021-to date with Wendy Williams: The Movie and Salt-N-Pepa among A25-54 and W25-54, and 3 of the top 4 with A18-49 and W18-49 (#1/#2: Wendy Williams: The Movie & Salt-N-Pepa and #4: Girl in the Basement).
There has been no air date announced for Harry &Meghan: Escaping the Palace.
Facebook
Twitter
Pinterest
LinkedIn

Surprise
%
About Sammi Turano 4547 Articles
Sammi has been a journalist for over a decade, specializing in entertainment, lifestyle, sports and celebrity news. She is the owner of TVGrapevine and Football in High Heels and the Host of Grapevine in High Heels With Sammi.