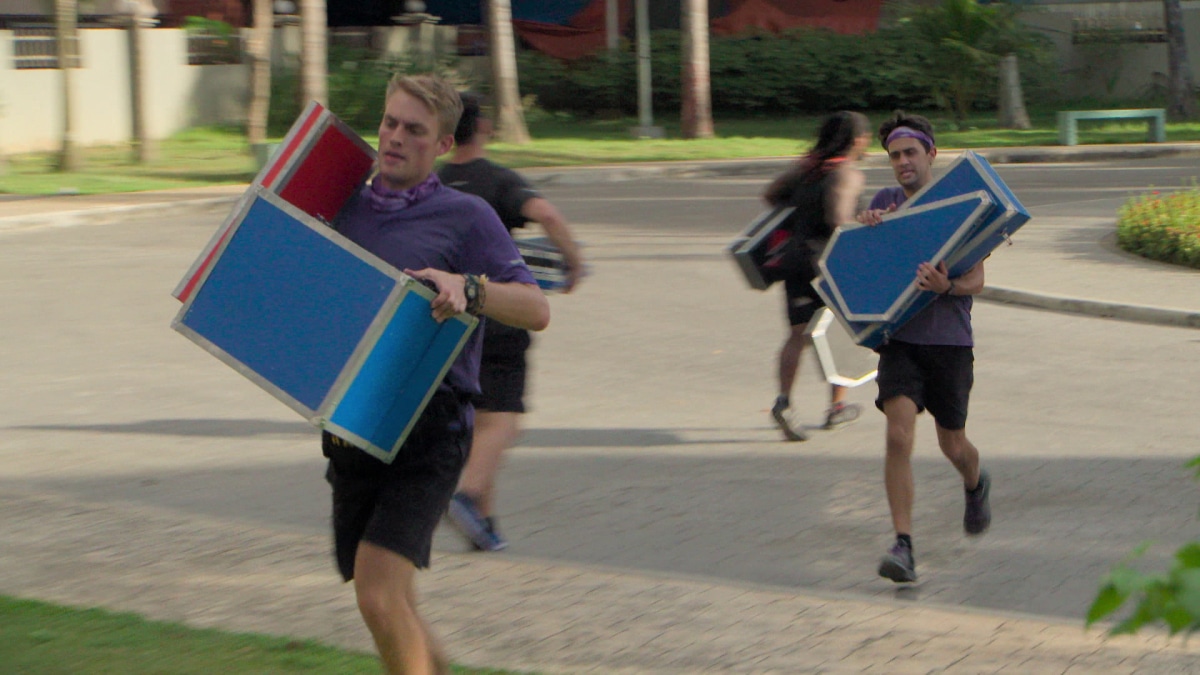 ÒRun on Your Tippy ToesÓ Ð In the first ever City Sprint, the final four teams will have no Road Blocks, no Detours and complete every challenge as a team as fast as they can when they race through Manila, the capital of the Philippines, on the penultimate leg of THE AMAZING RACE, Wednesday, Dec. 9 (8:00-9:00 PM, ET/PT) on the CBS Television Network. Phil Keoghan is the host. Pictured L-R: Will Jardell and James Wallington Photo: Screen Grab/CBS ©2020 CBS Broadcasting, Inc. All Rights Reserved

We are at the home stretch of CBS’s The Amazing Race. With only four couples left, it is truly anyone’s game as to who will win. This week, they are heading to Manila, Philippines. Once they arrive, they will all have to race to Lapu Lapu Circle for their next clue.

The alliance plans to try and get rid of DeAngelo and Gary, or at least hope they are eliminated. At this point, everyone is on the same flight, so it is an even playing field. However, this leg is different. Phil, who meets them when they land, tells them that there are no detours or roadblocks, they are just racing around the city and then returning to the starting point. He also tells them they should NOT be helping each other out.

Clue one: Find a traffic cop, who will give them the next clue.

Clue two: Head to the Mall of Asia.

Right now, Riley and Maddison and DeAngelo and Gary are in the lead, while Will and James and Hung and Chee are stuck in traffic. They initially attempted to get the clue from DeAngelo and Gary’s cop, but no avail.

James and Will and Hung and Chee, finally get the clue, putting them in third and fourth place, respectively.

Clue Three: Do a 500 meter dash in high heels. The teams are still in the same places, with DeAngelo and Gary and Riley and Maddison being the first to get the next clue, despite complaining about the high heel task. James and Will finally catch up, leaving Hung and Chee still in last place.

Clue 4: They arrive at the Arch of Goodwill in Binondo, where thy find the clue in the lion’s mouth. However, Hung and Chee think they are looking for statues, which keeps them in last place.

Clue 5: They must prepare food for a horse. The ingredients are in different stalls and then they must mix it up and feed it to the horse. This task puts James and Will in the lead.

Clue 6: Identify four pieces of music they heard throughout the race, then match the instruments to the country’s flags. Everyone ends up struggling with this one because they mistakenly put the flags in the order of the music, not in the order of where they visited. The alliance finally agrees to work together, purposely leaving DeAngelo and Gary in the cold. As the alliance heads to the pit stop, DeAngelo and Gary decide to take a 2 hour penalty.