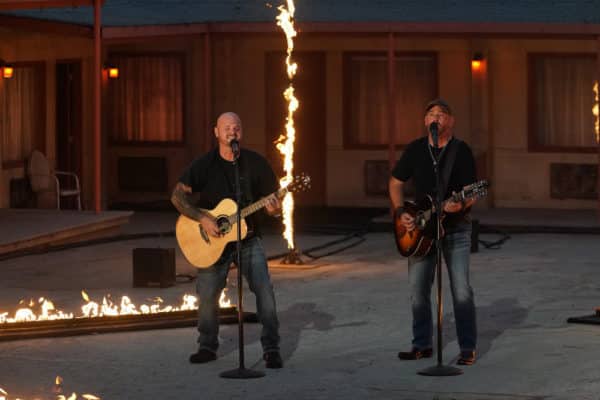 Tonight is the first night of semifinals on NBC’s America’s Got Talent. Eleven acts will perform, with only five moving to the finals. Terry Crews hosts, while Heidi Klum, Howie Mandel and Sofia Vergara judge. Simon Cowell is still out due to his injury.

Two of the acts tonight are Wildcard acts.

Double Dragon: It starts off in what looks like a juice bar and then goes into different parts of the theme park….or so it seems. I am not at all familiar with the song, but I do love their spirit and energy. I was surprised there was not more dancing, but their sass and spirit more than make up for it. I just hope they don’t end up with the first performance curse.

The judges love their energy and diva confidence.

WILDCARD ACT! Dance Town Family: They are well deserving of this second chance. I am a huge fan of Latin dance and this is just incredible. I love their upbeat dance moves, their lifts, the costumes, everything comes together so well. I can’t help but smile throughout the entire performance.

The judges admire the work that went into the performance and think that they stepped it up.

Broken Roots: They were my favorite last week and I was thrilled that they came back for another round. Tonight they really knock it out of the park. Not only do they have a great pyro show in thr background, but they really stepped it up with the singing and performances. Watching them brings a sense of calm and peace for me. I know that is not what this performance is supposed to do, but watching them has that kind of effect on me.

The judges think they are inspirational and that they get better every time they perform. Howie even bets that they will make it to the next round.

Spyro Bros: The special effects were amazing, but they seem to be struggling a bit tonight. I feel really bad for them because they seem to be working so hard and it is obvious this means a lot to them.

The judges point out the mistakes, but still give them words of encouragement.

WILDCARD ACT: Thomas Day: He was supposed to be in the quarterfinals, but he and his mom both had COVID-19 and had to quarantine. I feel really bad for him, but am glad he is getting this chance. His voice is so incredible….he reminds me of a baby John Mayer or Ed Sheeran with that voice. WOW.

The judges think he gave America what they need and hope he makes it to the finals.

Alan Silva: Sweet justice….this is by far the BEST act of the night. The special effects, the fire, the aerial moves….all I can say is TOP THAT!

The judges seem to be disagreeing about how they feel…Howie thinks it is more of the same, but the ladies love him!

Shaquira McGrath: I am not sure about this song choice for her, but she really commanded that stage. Her voice is so powerful and there is no doubt in my mind she has an amazing career ahead of her!

The judges think she owned the stage and loved the performance.

Awe, she was able to give a shout out to her mommy!

Brandon Leake: He reads letters to his dad he wrote on each birthday growing up and how he wanted to see him on his birthday….and how he finally gave up on him….and forgave him….it is so powerful, moving and relatable. I am shaking, crying and just want to hug him.

The judges are blown away and think he is on his way to the finals.

Malik Dope: He gets better and better each and every time he performs. There is something so mesmerizing about watching him between the music, the drums and his moves on wheels? Whoa…he needs a show STAT. This is one I wouldn’t mind paying to see.

The judges think he is a showman and think he belongs in Vegas.

Archie Williams: He reminds me of Luther Vandross. I love his voice and how he is developing as a performer. Win or lose, he is certainly going places. That being said, I will be shocked if he isn’t in the finals. I also love how he dedicated it to his daughter.

The ladies are gushing, while Howie says his imperfection is his perfection.

Roberta Battaglia: What a way to end the evening. Her voice gives me goosebumps. She has the perfect combination of mature star quality and innocence in her performance, making her a force to be reckoned with. I totally see her as a Disney star within the next year.

The judges are wowed by how well she performs for someone who is eleven years old.