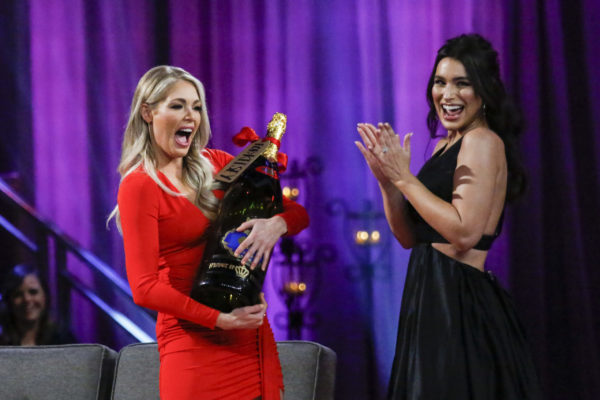 THE BACHELOR - "The Bachelor: The Women Tell All" - Peter's dramatic and emotional journey is about to come to an end. But first, he must come to grips with Madison turning away from the strong relationship they have developed until the fantasy suites. Will Madison even show up to the rose ceremony? And then it's a sensational and shocking "The Bachelor: The Women Tell All," MONDAY, MARCH 2 (8:00-10:00 p.m. EST), on ABC. (ABC/Kelsey McNeal) KELSEY

Tonight is the Women Tell All on ABC’s The Bachelor. Several women from Peter’s season will return to face not only him….but each other. We will also see who will be in the final two in the second to last rose ceremony of the season. Will Madi eliminate herself after finding out Peter was with the other women? We are about to find out.

First though….where in the world is…..Madi Prewett? She has yet to show up for the rose ceremony, even though the other girls are there.

Madi finally shows up and the rose ceremony begins.

Hannah Ann gets the first rose. Peter offers the second one to Madi and after much hesitation, she accepts it, which means that Victoria is going home. I kind of feel bad for her because she seems to have really loved him,despite how insecure and emotional she acted. To be fair though, it is an emotional roller coaster.

The women at the WTA are: Katrina, Maurissa, Alexa, Kylie, Sarah, Kiarra, DeAndra, Savannah, Alayah, Victoria F, Kelsey, Mykenna, Victoria P, Sydney, Lexi, Shiann and Tammy. No word as to why Kelley and Natasha were no shows. Thank YOU Reality Steve for posting this on Instagram.

Chris jokes about linger-ey and finascos. He also asks the girls about the Madi situation and Sydney surprisingly defends her, while Lexi thinks she was unfair.

We get some highlights from the season and then Chris questions them about Alayah. After the girls call her out about being ‘on’ and the fact that she spread rumors. To her credit, she admits it and even makes fun of her voice, which her mom calls a princess voice.

Then…I have no clue who says what because everyone is screaming.

Kelsey owns the fact that she overreacted over Champagne gate….and then we get into her alleged pill popping and drinking debacle. Cue more screaming, mostly from Tammy. Kelsey says it was wrong to accuse her of such things because it can impact her reputation and hurt those who actually are suffering.

Now everyone piles on Mykenna. Tammy refuses to apologize to her, but Mykenna says she taught her how she does NOT want to be. Tammy continues to bully her and make accusations. Mykenna gives her what for and says she needs to go to canada to learn how to treat people.

Kelsey gets the hot seat, where she tearfully relives her time on the show. She admits she misses Peter and thought they had a future together. He made her feel so important and loved and special. She then is forced to relive Champagne gate again, but is at least able to laugh about it now. She also defends her emotions and thinks people should see it as a positive rather than a negative.

Ashley I surprises her with champagne and makes her feel better about being emotional. It is very sweet.

Victoria F is now in the hot seat. She admits to getting in her own way and girl, do I ever understand. She says things were hard and yes,she could have done things differently. Again, I so understand.

After we see some viewer parties getting crashed, Peter joins everyone on stage. Kelsey speaks highly of him, and he does the same for her. He also has a sweet moment with Victoria F.

The girls all take turns talking to Peter about decisions he made and he says that he reiterates that he was following his heart.

Rachel talks about online bullying and reads some messages women have received. I won’t repeat them, but they make me sob so hard. Nobody on Earth deserves this….NO ONE.