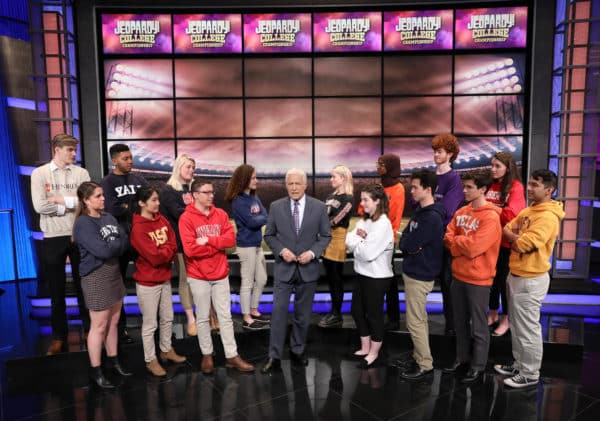 America’s Favorite Quiz Show® today announced the match-ups for the first week of the JEOPARDY! College Championship presented by LendingTree®. Starting Monday, April 6, this 10-day special event features 15 of America’s sharpest students competing for the $100,000 grand prize and a berth in the next Tournament of Champions.

The complete schedule of week one match-ups is as follows.

Marshall Comeaux, a sophomore at the University of Texas (Austin, Texas) from Dallas, Texas.

Kayla Kalhor, a sophomore at the University of Florida (Gainesville, Fla.) from Longwood, Fla.

Londyn Lorenz, a sophomore at the University of Mississippi (Oxford, Miss.) from Perryville, Mo.

Xiaoke Ying, a sophomore at the University of Southern California (Los Angeles, Calif.) from Arcadia, Calif.

Nibir Sarma, a sophomore at the University of Minnesota (Minneapolis, Minn.) from Eden Prairie, Minn.

The JEOPARDY! College Championship presented by LendingTree® is 10-day special event featuring 15 of America’s sharpest students. The winner claims the $100,000 grand prize and a berth in the next Tournament of Champions. To learn more about the tournament, please visit the College Championship mini-site on Jeopardy.com.

JEOPARDY!, America’s Favorite Quiz Show™, and its host Alex Trebek are in their 36th season in syndication. With a weekly audience of 23 million viewers, JEOPARDY! is the top-rated quiz show on television, and has received numerous awards and honors, including the 2019 Emmy for Outstanding Game Show Host. The show holds the Guinness World Records® title for the most Emmy® Awards won by a TV game show (35 Emmys); it is also the recipient of a 2011 Peabody Award. JEOPARDY! is produced by Sony Pictures Television, a Sony Pictures Entertainment Company; it is distributed domestically by CBS Television Distribution and internationally by CBS Television International, both units of CBS Corp. For more information, please visit Jeopardy.com. Follow JEOPARDY!: Facebook | Twitter | YouTube | Instagram