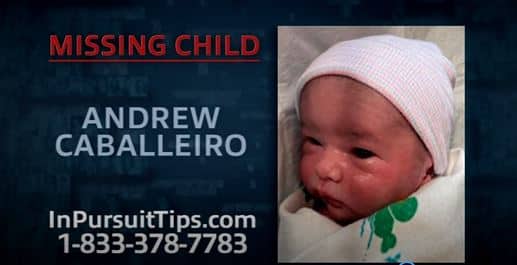 The season 2 finale of Investigation Discovery’s IN PURSUIT WITH JOHN WALSH, airing on Wednesday, April 1 at 10/9c, features the missing newborn case of Andrew Caballeiro. On January 29, after his mother, grandmother and great-grandmother were found murdered in their Miami-Dade home the day before, an Amber Alert was issued for missing 1-week-old, Andrew Caballeiro, believed to be in the company of his father, Ernesto Caballeiro. Ernesto is believed to be responsible for the triple homicide and was since found dead of an apparent self-inflicted gunshot wound on January 30. There has been no sign of baby Andrew Caballeiro.

The most important tool to help recover a missing child is sharing photos of that child. Please feel free to share the photo and video as needed.

We are encouraging any viewers with any information on Caballeiro’s whereabouts to call or text us at 1-833-3-PURSUE or to submit online at our dedicated hub at InPursuitTips.com.These resources are both staffed by trained and Spanish-speaking operators who will accept anonymous tips and alert the proper authorities.

The finale also shines a light on the unknown killer in the double murders of the Delphi girls from Indiana, California fugitive Francisco “Frank” Contreras, and spotlights fugitives Steven Todd from Indiana and Javiar Oropresa from Illinois in its “15 Seconds of Shame” segment. The series also works with the National Center for Missing & Exploite Children to shine a national spotlight on two missing children, with the finale featuring Osciel Rico from New Mexico and newborn Andrew Caballeiro from Florida.