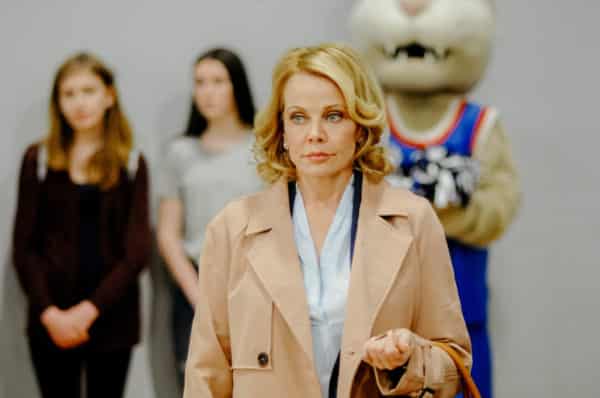 Gail O’Grady is probably one of the most recognized faces in Hollywood. She has been in several TV shows and movies, including Hot Properties, American Dreams and the Sex and the Single Mom movie series on Lifetime. She also guest starred on several big name shows such as Castle, Desperate Housewives and Boston Legal. She can do comedy and drama and is always makes an impression with every role she takes on.

Now she is starring in a brand new Lifetime movie, Identity Theft of a Cheerleader, which is set to premiere tonight at 8pm. In the movie, Gail plays Angie, a mother whose daughter wants a do over of her senior year in high school. In order to do this, she steals the identity of a current high school cheerleader.

In a recent interview with TVGrapevine, Gail revealed that she loved playing the role of Angie and working with her TV movie daughter, who was played by Mairia Walsh. However, the most challenging part for her channeling a type A personality. She says that in the movie, she spends time yelling at her daughter, which is something that took some getting used to! However, she had nothing but good things to say about her costars and the crew and she loved working with everyone.

Now that the movie is getting ready to air, Gail is hard at work on the next thing. While she did not give much away, I can promise that fans are going to want to tune in to see what she does next.

As for her dream role? She would love to do another period piece like she did when she was starring in American Dreams. She says that it was one of her favorite roles and she loved every moment of being on the show. She says that although the show focused a lot on dance, she loved the historical aspect of it more.

Identity Theft of a Cheerleader airs tonight at 8pm on Lifetime.