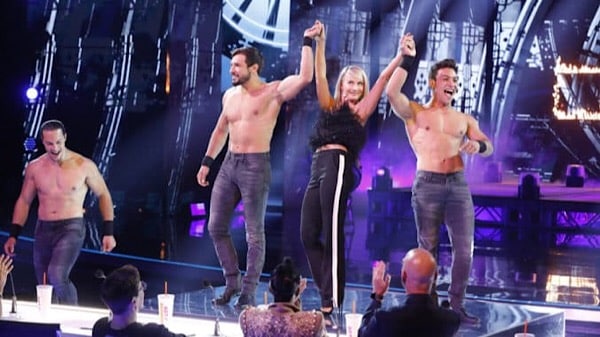 Ndlovu Youth Choir: They are incredible. My jaw is on the floor from start to finish and I’d be SHOCKED if they don’t make it to the finals. They are just that good.
The judges find them beautiful and inspirational and hope they make it to the next round.

Ansley Burns: She takes on Carrie Underwood and while she is a good singer, I feel like she is more Disney than Vegas.
The judges love her though and think she is adorable and think she should have her own show. However, they also give her some pointers and explain the song might not have been the right choice.

Messoudi Brothers: They are a balancing act that like being shirtless. They include Julianne in the act and do some new balancing tricks, but for me, nothing really changed from last week. They are still very good though and I hope they step it up if they make it to the next round.
Julianne loved it, of course. Gabrielle and Howie think they did incredible and Sean loved how ‘big’ the act was.

Tyler Butler Figueroa: He is a cancer survivor who won Simon’s Golden Buzzer. Tonight, he is playing his violin in honor of his fellow survivors. He is incredible and I know he will certainly make it big somewhere. He is just THAT good. Win or lose, we haven’t heard the last of this kid.
The audience and judges go crazy for him and think he is triumphant and went above and beyond with his performance.

Greg Morton: He does some more pop culture impressions and this time focuses on cartoons. He jokes that he cannot do Disney impressions due to copyright issues, but otherwise takes us through the big ones throughout the years, including The Simpsons and some WB favorites. He even throws in some Bobby’s World for Howie.
Simon is not impressed with him, but the others, especially Julianne, who thinks he should be hired by an animation company to do voiceovers.

Kodi Lee: Once again, I cried. This kid is just so incredible that it is hard to watch him and not tear up. Tonight he impressed like no other and just melted my heart. There is literally nothing else to say except he is amazing and a star in his own estimation.
Sean is crying, Gabrielle calls him world changing and Howie and Simon think he is magical.

Jackie Fabulous: Tonight she jokes about the Dunkin Save and being a ‘fat actress.’ She is funny, but I feel like tonight something was different. I can’t put my finger on what though…..
Simon seems to feel the same because he was not amused by her act. Howie, however, enjoyed it and thinks she is authentic.

Robert Finley: Tonight he plays the blues. He does well as usual and I think he has an amazing story, however, after seeing several of these acts, I worry that he might get lost in the shuffle. I hope not though, because he is incredible and deserves to have his talent recognized.
Simon wanted to see more, but Sean wants to see him in a Tarantino movie.

Eric Chien: He continues with his magic. This time he uses a map for part of his act and apparently does a tour around the world? I’m lost, as are the other judges. I know his forte is close up magic, but tonight this didn’t work at all.

Light Balance Kids: It’s a comic book theme! The nerd in me is so excited. It is easily the best act of the night and one I hope goes to the finals. They are just that creative, ingenious and talented.
Simon loved it so much he apologized for dissing them last week, while Julianne wishes they picked a different theme. Gabrielle and Sean love it as well.

Benicio Bryant: He ends the night with another original performance. While he sings very well, I feel like it didn’t exactly stand out. Although the judges enjoyed it, he is going to have to rely on the votes from America because his competition is stiff tonight.