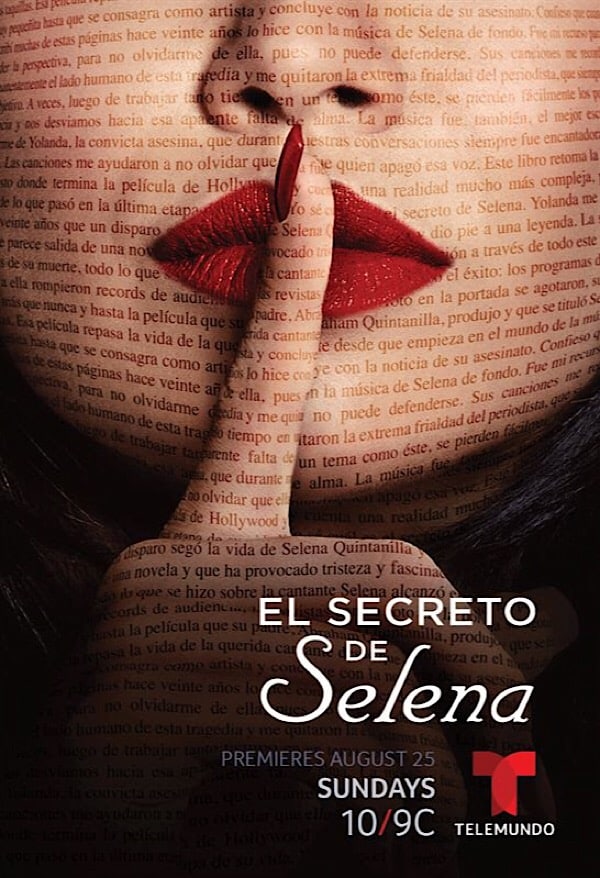 Telemundo presents El Secreto de Selena (Selena’s Secret), an investigative view into the events that led to Selena Quintanilla’s tragic death, premiering Sunday, August 25 at 10pm/9c. The series is based on the bestselling book of the same name written by María Celeste Arrarás, renowned Telemundo journalist and three-time EMMY® winner, and will provide viewers an in-depth look into the investigation and trial proceedings for the legendary Mexican-American singer’s murder in 1995.

El Secreto de Selena delivers a powerfully intimate and intense examination into the shocking murder of the legendary queen of Tex-Mex music. Selena, portrayed in the series by Maya Zapata, stood on the cusp of becoming a crossover music superstar before being shot and killed at the age of 23 by Yolanda Saldívar, president of her fan club and personal friend. The series chronicles the lives of Selena and the main players in her world before her tragic death, including Yolanda (Damayanti Quintanar), whose fixation on her idol reaches dangerous proportions; and Maria Celeste Arrarás (Sofia Lama), the ambitious journalist who would play a vital role in the exhaustive investigation of the star’s assassination.

Viewers can learn more about El Secreto de Selena on Telemundo.com, and follow the series on Instagram @ElSecretodeSelenaTV, including @Telemundo and join the conversation using #ESDS.

NBCUniversal Telemundo Enterprises is a world-class media company leading the industry in the production and distribution of high-quality Spanish-language content to U.S. Hispanics and audiences around the world. This fast-growing multiplatform portfolio is comprised of the Telemundo Network and Station Group, Telemundo Deportes, Telemundo Noticias, Telemundo Global Studios, Universo and a Digital Enterprises & Emerging Business unit. Telemundo Network features original Spanish-language entertainment, news and sports content reaching 94% of U.S. Hispanic TV households in 210 markets through 28 local stations, 51 affiliates and its national feed. Telemundo also owns WKAQ, a television station that serves viewers in Puerto Rico. Telemundo Deportes is the designated Spanish-language home of two of the world’s most popular sporting events: FIFA World Cup™ through 2026 and the Summer Olympic Games through 2032. Telemundo Global Studios is the company’s domestic and international scripted production unit including Telemundo Studios, Telemundo International Studios, Telemundo International, as well as all of the company’s co-production partnerships. As the #1 media company reaching Hispanics and millennials online, the Digital Enterprises & Emerging Business unit distributes original content across multiple platforms, maximizing its exclusive partnerships with properties such as BuzzFeed, Vox, and Snapchat. Through Telemundo Internacional, the largest U.S.-based distributor of Spanish-language content in the world; and Universo, the fastest growing Hispanic entertainment cable network, the company reflects the diverse lifestyle, cultural experience and language of its expanding audience. NBCUniversal Telemundo Enterprises is a division of NBCUniversal, a subsidiary of Comcast Corporation.