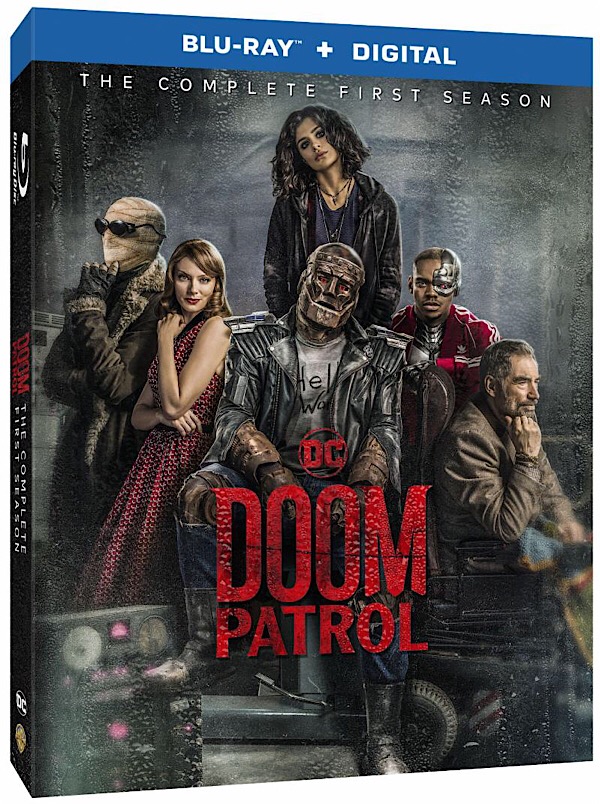 0
Read Time:4 Minute, 49 Second
BURBANK, CA (July 1, 2019) – Things are about to get weird! Get ready for nonstop action as the world’s favorite misfit DC Super Heroes are about to enter our universe with the release of Doom Patrol: The Complete First Season on Blu-ray and DVD on October 1, 2019 from Warner Bros. Home Entertainment. Strap yourself in for an exhilarating ride with all 15 episodes from the first season of the DC UNIVERSE original series, plus enjoy the captivating extra features including gag reel and deleted scenes. Doom Patrol: The Complete First Season is priced to own at $24.98 SRP for the DVD ($30.99 in Canada) and $29.98 SRP for the Blu-ray ($39.99 in Canada), which includes a Digital Copy (U.S. only). Both sets have an order due date of August 27, 2019. Doom Patrol: The Complete First Season is also available to own on Digital via purchase from digital retailers (available on August 26th in the U.S.).
Following the mysterious disappearance of their leader, Dr. Niles Caulder (“The Chief”), these reluctant heroes will find themselves in a place they never expected to be, called to action by none other than Cyborg, who comes to them with a mission hard to refuse. Part support group, part Super Hero team, the Doom Patrol is a band of superpowered freaks who fight for a world that wants nothing to do with them.
“In only its first season, the critically acclaimed series has received a 95% certified fresh rating and scored an 8 out of 10 on RottenTomatoes.com – and continues to gain momentum,” said Rosemary Markson, WBHEG Senior Vice President, TV Marketing. “Now is the time to join in on the investigation of the world’s weirdest phenomena with these unique DC Super Heroes. We are excited to make this outstanding first season available on all formats – Digital, Blu-ray and DVD – for fans and newcomers to enjoy along with a never-before-seen gag reel!”
With Blu-ray’s unsurpassed picture and sound, Doom Patrol: The Complete First Season will be released in 1080p Full HD Video with DTS-HD Master Audio for English 5.1. The 2-disc Blu-ray will feature a high-definition Blu-ray and a Digital Copy of all 15 episodes from season one (available in the U.S.).
Doom Patrol stars Diane Guerrero (“Orange is the New Black”), April Bowlby (“Two and a Half Men”), Joivan Wade (“Doctor Who”) and Alan Tudyk (“Firefly,” Serenity) with Matt Bomer (Magic Mike), and Brendan Fraser (The Mummy), and a special appearance by Timothy Dalton (License to Kill). Based on the characters from DC, Doom Patrol is produced by Berlanti Productions in association with Warner Bros. Television, with executive producers Greg Berlanti (“The Flash,” “Supergirl,” “Riverdale,” “DC’s Legends of Tomorrow)”, Jeremy Carver (“Supernatural,” “Frequency”), Geoff Johns (Aquaman, Wonder Woman), Chris Dingess (Agent Carter, Eastwick) and Sarah Schechter (“The Flash,” “Supergirl,” “Blindspot,” “Black Lightning”). Doom Patrol is the second original live-action series from the DC UNIVERSE digital subscription service.
DIGITAL FEATURES
BLU-RAY & DVD FEATURES
15 ONE-HOUR EPISODES
DIGITAL
The first season of Doom Patrol will be available to own on Digital on August 26th (in the U.S.). Digital allows consumers to instantly stream and download all episodes to watch anywhere and anytime on their favorite devices. Digital is available from various retailers including Apple TV, Amazon Video, Google Play, Vudu, PlayStation, Xbox and others. A Digital Copy is also included in the U.S. with the purchase of specially marked Blu-ray discs for redemption and cloud storage.
BASICS
Street Date: October 1, 2019
Order Due Date: August 27, 2019
BD and DVD Presented in 16×9 widescreen format
Running Time: Feature: Approx 900 min
Enhanced Content: Approx 25 min
UNITED STATES
DVD
Price: $24.98 SRP
3 DVD-9s
Audio – English (5.1)
Subtitles – English
Catalog # 1000746973
UPC # 883929692170
BLU-RAY
Price: $29.98 SRP
2-Disc Elite
BD Audio –DTS-HD Master Audio 5.1 – English
Subtitles – English
Catalog # 1000746991
UPC # 883929692316
CANADA
DVD
Price: $30.99 SRP
3 DVD-9s
Audio – English (5.1)
Subtitles – English
UPC# 883929692170
Catalog# 1000746973
BLU-RAY
Price: $39.99 SRP
2-Disc Elite
BD Audio –DTS-HD Master Audio 5.1 – English
Subtitles – English
UPC# 883929694105
Catalog# 1000747946
About Warner Bros. Home Entertainment Inc.
Warner Bros. Home Entertainment (WBHE) brings together Warner Bros. Entertainment’s home video, digital distribution and interactive entertainment businesses in order to maximize current and next-generation distribution scenarios. An industry leader since its inception, WBHE oversees the global distribution of content through packaged goods (Blu-ray Disc™ and DVD) and digital media in the form of electronic sell-through and video-on-demand via cable, satellite, online and mobile channels, and is a significant developer and publisher for console and online video game titles worldwide. WBHE distributes its product through third party retail partners and licensees.
About DC
DC, home to iconic brands DC (Superman, Batman, Green Lantern, Wonder Woman, the Flash), DC Vertigo (Sandman, Fables) and MAD, is the creative division charged with strategically integrating across Warner Bros. and WarnerMedia. DC works in concert with many key Warner Bros. divisions to unleash its stories and characters across all media, including but not limited to film, television, consumer products, home entertainment, and interactive games. Publishing thousands of comic books, graphic novels and magazines each year, DC is one of the largest English-language publishers of comics in the world.
DOOM PATROL and all related characters and elements are trademarks of and © DC Comics.
Facebook
Twitter
Pinterest
LinkedIn