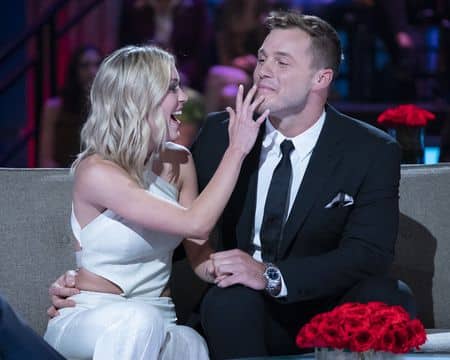 Tonight is the second night of The Bachelor finale on ABC. Last night, Colton said he loved Cassie and is willing to fight for her despite her dumping him. He let Tayshia and Hannah G go in order to try and find Cassie and win her back. We left off with him knocking on her hotel room door. Why is she even in Portugal? I would have thought she would have been sent home.

Do these people really think Colton will be a virgin forever if Cassie doesn’t take him back? I cannot roll my eyes hard enough. I am SURE he will eventually lose his virginity. It just might not be with Cassie or because of the show.

Anyway, Colton and Cassie go downstairs to talk. He tries to explain his feelings and she is like, sorry, what? I’m sorry, but WTF? Is she not listening or does she not care? He explains they don’t have to get engaged and she goes on about who crazy it was that he let the other girls go for her. She is in shock and goes on about how she thought the other girls were further along. It is hard for her to be sure of what she wants and she doesn’t want him to give anything up for her. He explains he is willing to compromise and sacrifice for love. He is actually being quite reasonable. He vows to show her he loves her and they kiss. Did she really change her mind that fast….oh wait….she is still confused.

Cassie….let me explain it to you slowly. He loves you. He will do anything for you. It is not that complicated.

Okay…..now they meet his parents in Spain? WTF? She still thinks this isn’t normal and again, did she not know what this show was ABOUT? They kiss some more and she thinks she has to take it one step at a time.

Isn’t that what Colton JUST SAID?

So,Cassie gets a free trip to Spain but seems unclear on what she wants or why she is even on the show.

Chris Harrison says Colton might lose his virginity after all. OMG ENOUGH! If this were a female lead who was a virgin, we would not be harping on this. I am so sick of this.

We are now in Spain where Colton says he is willing to continue to take it slow with Cassie. He talks to his family and says he lost his virginity….but it turns out he was joking. He still has his V-card. He recaps the whole Cassie debacle and says he is in love, but she isn’t sure. However, he says she could be by the end of the week. I’m not sure that is how it works, but okay.

He goes to get Cassie and she is crying over her confusion. Girl, why are you even there? GO HOME if you don’t want to meet his parents. However, she goes to meet the family and we go through the debacle again….and I am sure as hell not repeating it.

Cassie talks to Colton’s dad, Colton talks to his mom and we go through it A-freakng-GAIN about how they are on different pages and she says she wants to be all in because she knows how much he loves her. They switch parents and have the same talk. His father is especially worried about him getting hurt again. He is willing to risk it for Cassie.

They go on one final date where they explore, go rock climbing, talk and kiss. I tune out because I’m sick of the same back and forth over and over again.

They also enjoy dinner and go into the fantasy suite. She knows he loves her…..but something seems off with her attitude. He is hopeful that this will be the NIGHT, so he kicks everyone out of the hallway. Except they have to come back to de-mic them. Will he lose his virginity? Find out on Unsolved Mysteries….#sarcasm.

Chris brings Sydney, Demi, Oneyka, Jason, Ben and Chris the Goose. Demi hopes Cassie jumps on him like a Portuguese fence…but it is his business. Sydney thinks it is an explosion waiting to happen and I cannot believe they are practically taking bets on this. Chris admits he didn’t have sex in the fantasy suite because he and Krystal focused on serious talks. Did we really need this segment? Jeez and crackers!

The next morning, he feels like a new man and they did what was best for their relationship. He says a gentleman never kisses and tells so the fact of whether or not he is a virgin remains an unsolved mystery.

Also? That morning after fantasy suite breakfast looks like someone ran to Aldi and grabbed a bunch of crap to serve them. I did spot the sliced pineapple, but this isn’t an episode of Psych, so it is a moot point. Or if you are Joey Tribbiani, a moo point.

The happy couple join Chris in the studio and they think it is weird to be in public together. They are in love, but not ready to be engaged. They are just enjoying dating now. He moved to LA to be closer to her, but they are not moving in together. They plan to spend time together and travel.

We see a montage of their time together and it is pretty cute. He gives her a final rose and she seems more excited about getting the rose than anything else. They also get a free trip to Thailand.

He won’t reveal if he lost his virginity, so that will be an unsolved mystery after all.

Air Supply performs and the happy couple dances to a montage of their journey.

I swear, these two nights could have been done in one hour last night.

Finally! The new Bachelorette is….HANNAH B!!!!! For those who could not keep the Hannahs straight this season, this is Beauty Pageant Hannah. As an aside, all the girls on this show have been beautiful, but her beauty is completely classic and she is one of the prettiest girls they have had on the show. She looks like a baby Bobbie Eakes. We see her get the call that she is the Bachelorette and it is so cute. I have to say I am excited because she is looking for love and has the sass to handle the drama from the guys. She is excited,but thinks it is surreal.Based on her banter with Chris,she definitely is sassy enough for this role.

She meets her first five men….with a backdrop of the mansion. She meets Luke, Dustin (who does the toast), Cam (who raps), Connor (who gives her a step stool to have them be eye to eye) and Luke #2.

She is the luckiest lady with these men so far….damn girl! You’ve got some hot men. She is ready to give out her first rose and she gives one to Cam.

Tune in for Hannah B’s season starting in May! Goodnight.