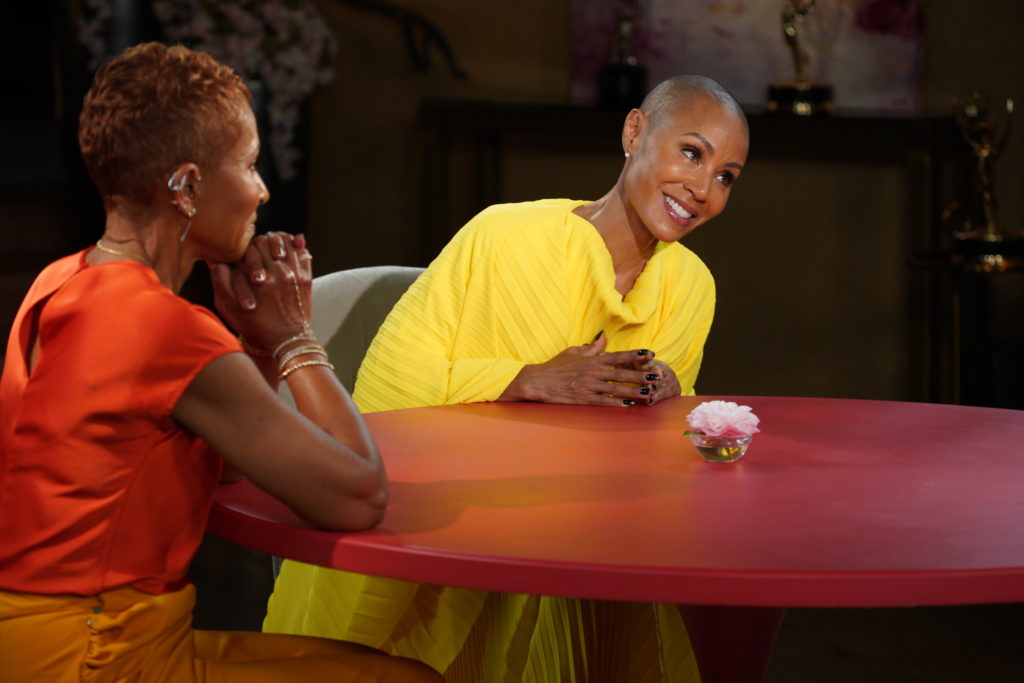 “The sexual and the physical development, I always felt so open and accepted.” – Willow

“’Cause you never made me feel like you hadn’t been through something, and I feel like a lot of moms want to keep this picture-perfect look of themselves even to their own daughter.” – Willow

“Well, sometimes, I think some women have a lot of shame around–” – Jada

“–There was so much taboo around sex back then. But I understand, too, for me, what my mother’s experience was, so she was just trying to keep me from making the mistakes

that she had made.” – Gammy

“And you were trying to keep me from making the mistakes that you made, and I decided

to bring you close to show you that you didn’t have to deal with our misguidance.” – Jada

Jada’s “biggest wound” is her fear of not being protected due to a lack of security after her grandmother passed away at age 13 (7:16-8:19)

“–Protection. And I don’t have a really good sense of what’s safe and what’s not. I’m either extremely protective or extremely defensive.” – Jada

“Right, and I’ll tell you why. The environment, it was my addiction. She [Jada] found her security through my mother.” – Gammy

“Right? But Mommy died when Jada was 13. When Mommy died, that’s when my addiction really took off. That’s a really important time to feel secure and safe.” – Gammy

“That’s when your womanhood starts.” – Willow

“Yeah. And that’s when she lost her security. You know, my mother was her backbone.” – Gammy

“Yeah, and her house was safe. And so once she was gone, there was no safety, so then I went into the world and created my own safety and that was crazy.” – Jada

Jada is a ‘terrified little girl’ hiding underneath a seemingly strong demeanor (8:19-8:51)

“And so those women that you see and you think are so strong, there’s this terrified little girl underneath.” – Jada

Jada, Gammy and Willow all felt a lack of support, shame around having emotions (8:53-9:58)

“Obviously, I was so supported throughout my entire childhood, but there were definitely times where you had trouble looking at your anxiety and your hurt, and so when I was trying to be open about mine, there was no room for that at the time.” – Willow

“I used to hold a lot of shame and thinking that something was wrong with me or I was too emotional.” – Willow

“Or I had a problem. But then when I asked you, like, ‘I wanna know you as Jada. Like, I don’t wanna just know you as my mom.’ And we started opening up that conversation and I learned more about her childhood and the kind of environment that you grew up in, I was like, ‘obviously me being a bleeding heart at every turn is gonna look extremely dangerous. Of course. Like, that makes all the sense to me.’” – Willow

“Totally. But now I’m an adult, and I still come to you all the time.” – Willow

Gammy’s mom taught Jada everything she knew about sex, but would try to scare Gammy out of intimacy (11:04-12:05)

“You know, everything is dirty.” – Gammy

“But she guided me. Her mother taught me everything about sex.” – Jada

“You were okay with your mother helping Jada with her– with sexual guidance?” – Kelly

“I would’ve been okay with it, had I known, but just the fact that she didn’t feel the need to inform me–” – Gammy

“But that was also probably her ownership of you.” – Gammy

“Like, ‘Adrienne is her mother, but she’s my responsibility.’“ – Gammy

“I love that. That’s some beautiful guidance.” – Kelly

“Yeah, it was gorgeous guidance. ‘Cause I felt all the confidence in the world. Because if she had said to me everything else that other people were telling me, like, ‘That’s a waste of time,

you need to stay in school.’ My mother was like, ‘Oh, no. We’re gonna go to California, and we’re gonna figure this out.’” – Jada

“Okay, then you feel like you can do anything.” – Kelly

“So it was moments like that– got into some real difficulty in Baltimore.” – Jada

“Got you out of Baltimore. That was–” – Gammy

“And she got me–she was like, ’Pack your…right now. Get in this car.’ And so that put me on the trajectory that I needed.” – Jada

“No parent just says that to a child if they don’t see something special in them that they’re like, ‘Okay, there’s a spark there that I don’t feel like is gonna get ignited in a courtroom.’” – Willow

Gammy saved Jada from potentially being trafficked when she was alone in Italy (13:23-14:40)

“And I’m thinking, ‘Oh, I’m in Italy. I’m 20.’ You know what I’m saying? Yeah, exactly. So I called my mother. I was like, ‘Mom, the valet wants to take me on this boat.’ She said, ‘Well, first of all, if he has a boat, what’s he doing parking cars? And second of all, you are not getting on no boat with nobody. If something happens to you, nobody’s gonna hear you. You’re gonna be in the middle of nowhere. Do not Jada.’And I said, ‘Oh, snap, Mom. You right.’ And let me tell you– ’cause I was ’bout to get on that boat.” – Jada

“20? See? Still need a mom. That’s beautiful and speaks to the bond. Even though the bond had been through periods of times that had broken points, a daughter always wants her mother. And if a mother’s ready to receive and be there then, there’s always time for repair.” – Kelly

“Yeah, ’cause for all I know, I could’ve been trafficked. Straight up. ‘Cause they knew I was alone. I think to that day, I’m like, ‘She saved my life again.’” – Jada

Gammy dropped everything and moved to Australia to help Jada raise Willow and Jaden during The Matrix filming (14:45-15:28)

“Oh, yeah, when I got ‘The Matrix,’ and I literally just had Willow. We were gonna be in Australia for like a year and a half. And I called my mom and I was like, ‘I need some help.’“ – Jada

“And I did not hesitate. I did not have a conversation with my husband at the time. She asked me and I immediately said, ‘Absolutely.’ Because I knew that it was an opportunity for us to heal.” – Gammy

“There was this healing in watching her give to them what we didn’t have. But we were having it through them.” – Jada

“Because we didn’t hug in our family. We knew we were loved.” – Gammy

“But it just wasn’t that kind of nurturing touch. And you remember how you always wanted to–” – Gammy

“–Cuddle and sleep with us and–” – Gammy

“But that was different for her. She never cuddled with me.” – Jada

“Yeah. And it felt so good. It felt so good to be able to have that, and I never had it. When I had it with you, then I missed it with Jada. I realized how much I missed with her.” – Gammy

25-year-old Katrice Newell from Atlanta joins the table to share her struggles with Mother Hunger (24:42)

Mother of two, Rachelle Kelln of Saskatoon who lost her mother at age two, shares her story of how a lack of nurturing played out in her life (28:23)