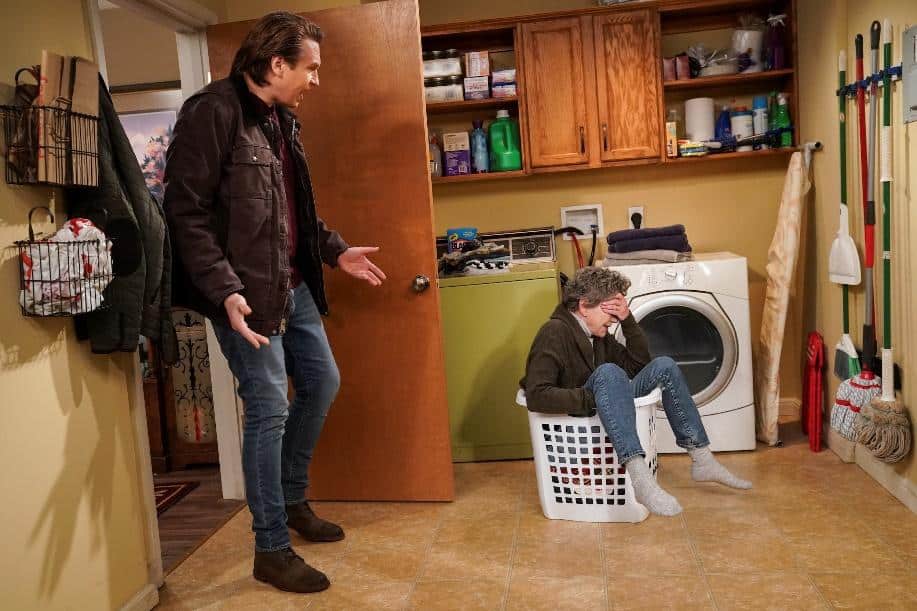 ICYMI: How We Roll Recap for The Laundry Basket

The episode opens with Jen telling Tom about her bad luck finding a new job. She is happy, however, that her clients are willing to follow her, even though she is working from home.

Tom rushes to Helen’s house and finds her stuck in a laundry basket. He rushes to help her, even though she insists she is fine. However, he is still worried about her well being.

At the bowling alley, Lew insists that Tom needs a social media presence and tries to help. Archie snarks at them to get back to work, but Tom wants to check in on Helen. Lew is filming it all live and tells him to take his shirt off to lighten the mood.

That night, Jen is thrilled that she has so many appointments, when Tom comes home, still worried about Helen. Jen thinks she will be fine, but Tom isn’t convinced. She tells him that he should get her a smart watch to track her, so he decides to take her to buy one.

The next day, Tom takes Lew and Helen to get the smart watch. She thinks they are getting hotcakes, but Tom confesses that he wants her to get the watch. This only upsets Helen, even though they try to convince her of the benefits. She just storms out of the store.

Back at home, Tom tries to convince Helen the watch is helpful and how much he worries about her. She insists that she is fine and will be around for 14 more Christmases. She finally agrees to take it so he will shut up.

At the bowling alley, Lew is still trying to make the bowling alley famous, only to annoy Archie. Tom comes in and tells them that Helen is wearing the watch. He sees she is at the same location, but he cannot find her. It turns out she hid the watch into his pocket.

Jen is finishing up on a client when Tom comes home, still upset. She tries to convince him everything will be okay and asks him to get towels out of the bathroom. However, he gets locked in due to the knob falling off. He tries to use the watch to call Jen, but it doesn’t work. However, Helen comes to rescue him, ultimately reversing the roles.

Tom tells Helen he wants her to move in with them. She is unsure, but agrees when he says they need her.

Later on, Jen and Tom talk about the idea of Helen moving in. She wishes he talked her first and he says she is renting out the house and giving them the money. She agrees to do it, but says she will have alone moments in her car.

The episode ends with Tom thrilled about his social media following and Helen ready to finish filling her water bed and watch a Blue Bloods marathon.