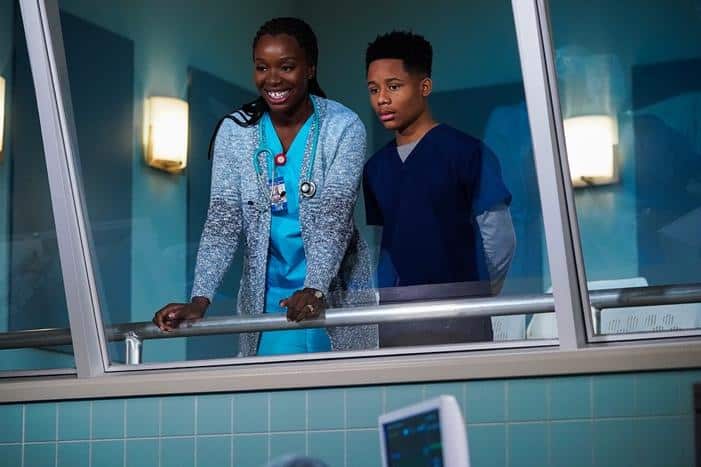 The episode opens with Ebun asking Dele if he wants more food. He says no, so she offers him fresh squeezed orange juice. He says he would like some, so Ebun tells Abishola to prepare it.

This leads to snarky moments between the women and Bob until Ebun leaves the room.

The conversation switches to Abishola’s plans for Dele since he has no school this week. She and Bob debate on what to do and then they decide Dele will go to work with Bob.

At the factory, Bob shows Dele around and tells him stories about working there as a kid. Dele says he is a third generation and Bob agrees.

Kemi goes to check on Ogechi because Chuey is worried about her going radio silent. It turns out she fell in the shower, so Kemi tries to help while Chuey panics and Ogechi fights.

Back at the factory, Douglas talks to Dele about his job and being high. Goodwin takes him away from his negative influence, while Kofo wants him to see the marketing department. Dele offers some ideas, which the men find impressive.

Ogechi is on her way to the hospital and wants Chuey. However, he is out of town, so it is up to Kemi to take care of her.

That night, Bob, Abishola and Dele have dinner with Dottie, Douglas and Christina. They talk about the day and share stories about the factory.

Abishola reminds him that he will be going to the hospital with her the next day, which upsets Bob until Douglas keeps repeating himself.

At the hospital, Abishola has Dele clean, despite him not understanding why. She recalls how she told everyone she was having a doctor when she was pregnant.

Kemi is talking to Chuey about his mom and then fills Abishola and Gloria in on how Ogechi broke her hip. She notices Dele cleaning and tells him to wash the pots next.

Bob is on the phone with his supplier. It alternates between fighting and love. Bob tells him about Dele and he wants to know if Dele will take over the business. Bob says Abishola wants him to be a doctor, so the supplier wants her to talk to his son, who wants to be an influencer.

Abishola takes Dele to see a surgery, which makes him sick.

Tunde and Olu are visiting Ogechi when Kemi walks in. Ogechi gives her an attitude, so Kemi goes to leave…until Ogechi admits she is lonely. She says that her son is the only one who loves her and that she and Kemi are very lucky to have that love.

That night, Abishola is upset about Dele not being able to handle the sight of blood. Bob talks to her about it and says he will do great at anything he does. She admits that she still wants him to be a doctor and will build up his blood tolerance.

Chuey makes them popcorn as the episode comes to an end.