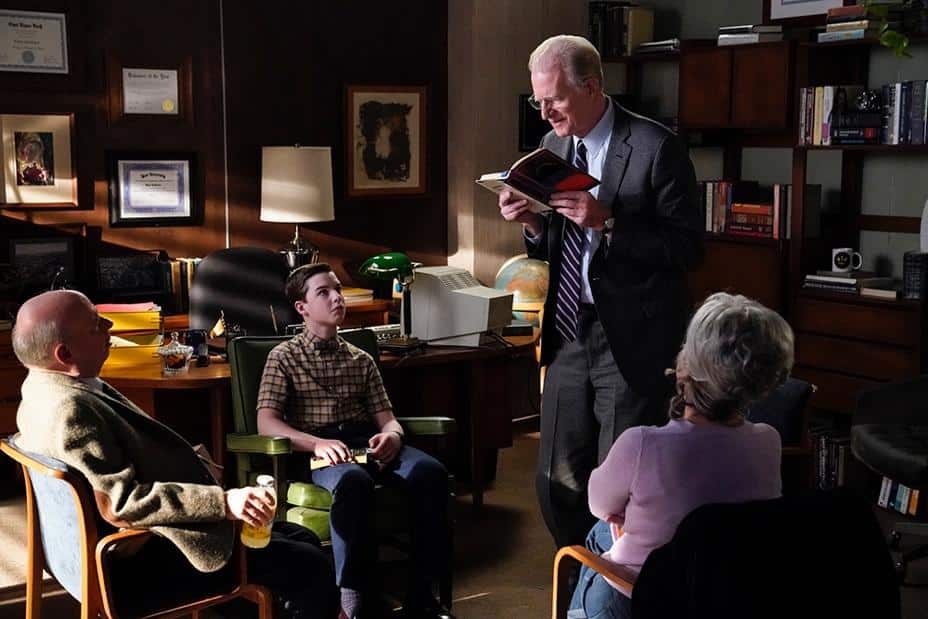 The episode opens with Mandy and Georgie talking about her pregnancy. She shows him the test she took as they both freak out. She says she was never knocked up by a seventeen-year-old and he says if it helps he will be eighteen in March.

Mary asks George what he is doing and is annoyed that he is working both jobs. He says that he might get fired from the school and have only one job.

Sheldon walks in and tells his parents Issac Asimov died. They don’t know who he is, so Sheldon tells them about his most popular writings. George said he still has no clue who he is and leaves.

Georgie tells Dale about Mandy’s pregnancy and he asks if it is his. He wonders if Mandy could have cheated.

Sheldon talks to MeeMaw about his hero’s death. He reminds her that his Pop Pop liked him, but Meemaw says that she is only interested in books with hot shirtless men with long hair on the covers.

Missy asks Mary if Pastor Jeff will let her babysit. Mary doesn’t think she will like it, but Missy thinks it will be easy money, However, Mary isn’t convinced.

Sheldon is working with Dr. Sturgis when Dr. Linkletter walks in, upset over the death of Issac Asimov. Dr. Sturgis is not sure who he is, so the guys talk to him about his books. They decide to do a book club in his honor.

Georgie goes back to talk to Mandy and asks if the baby is really his. He learns that she did NOT like this question and reports back to Dale, who wonders if she will keep the baby.Georgie says that she is keeping the baby and he will do the right thing and marry her.

Dale tries to convince him to talk to his parents, which leads to Georgie imagining George freaking out and tearing apart the store.

Sheldon tells Meemaw about the book club and asks her to join. She doesn’t want to, but he ends up guilting her into it by mentioning his grandfather.

Missy calls Pastor Jeff and offers to babysit. He says Mary said she wasn’t interested, but Missy convinces him she was wrong. She suggests they see Beethoven, which is PG, but God is cool with it.

George asks Dale about his relationship with Georgie. Dale says Georgie thinks they are close, but they aren’t. He says Georgie will talk to him soon.

Missy calls Mary out for lying to Pastor Jeff. This leads to a responsibility argument and Mary finally agreeing to let her babysit–but only if she calls if she has problems.

The book club begins with everyone discussing the book, but then talking about MeeMaw’s recent breakup with Dale. Dr. Linkletter uses this as an excuse to hit on her and does a dramatic reading of the book, hoping to impress her.

Missy leaves for her babysitting job. Mary wishes her luck and offers to have her bring the baby over. Missy thinks this would be irresponsible and leaves.

Dale tells Georgie he needs to talk to his dad. Georgie is not ready, but Dale tells him that George is hurt that he didn’t talk to him. At that moment, George walks in and Dale hangs up, pretending he was talking to his mom.

The doctors continue to do dramatic readings of the book, while hitting on MeeMaw. On the way home, MeeMaw says that if nothing else, it helped her remember her late husband. The doctors, on the other hand, decide to come up with ground rules to deal with MeeMaw.

Georgie comes home, looking for George, Mary asks if she can help him. Before she can say anything, Missy comes home, all messy from babysitting. She says she will never do it again and Mary was right. She goes to take a shower and a bath.

MeeMaw comes home to messages from the doctors, which she listens to in annoyance.

The episode ends with Georgie telling George about Mandy being pregnant.