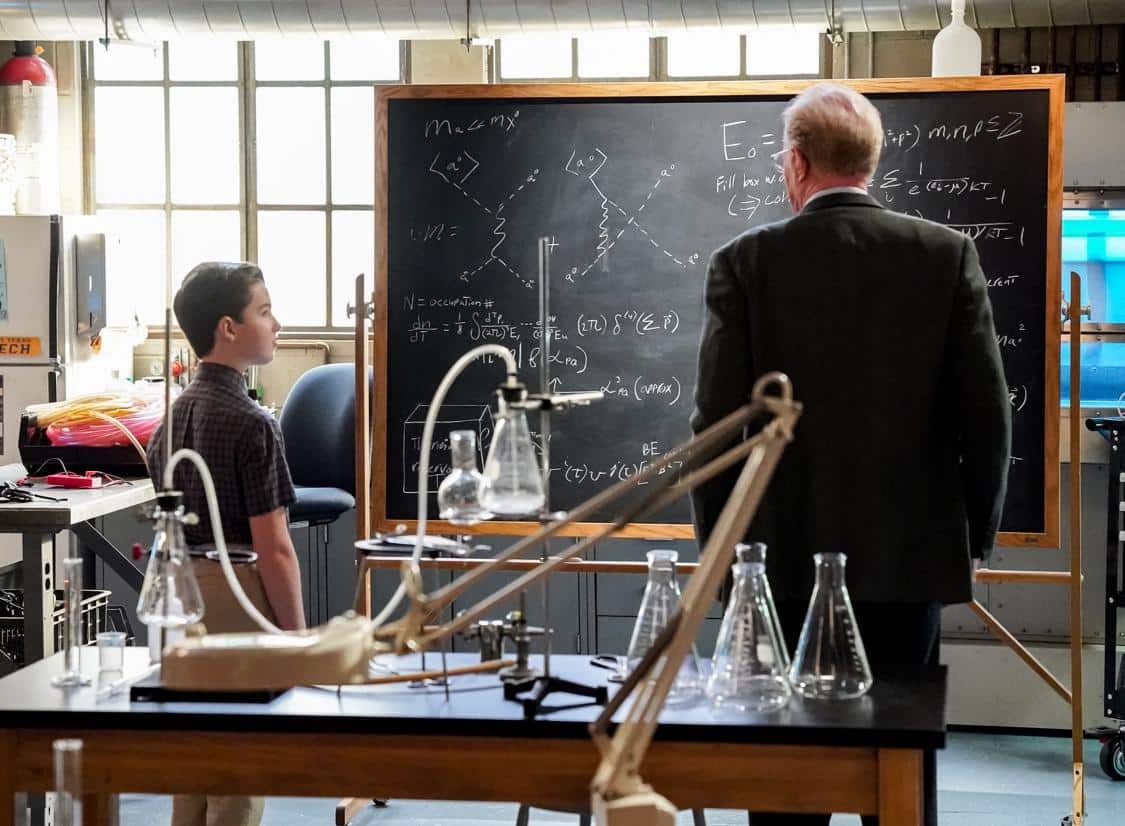 This week’s Young Sheldon opens with Mary and Pastor Jeff leaving for a business trip while singing J-E-S-U-S to the tune of B-I-N-G-O. Meanwhile, Billy asks George for permission to date Missy. George doesn’t think Missy is ready for dating, so he gives him some advice on love. Billy calls him a coach in life.

Dr. Linkletter and Sheldon are having issues solving an equation. Sheldon thinks they need a fresh set of eyes, but Dr. Linkletter doesn’t want Dr. Sturgis due to their complicated history,

MeeMaw is cleaning the laundromat when Dale comes in to pick her up for their date. She is cranky because of the work she has to do and wants Georgie to help. However, Dale won’t give him up because he is his best employee. MeeMaw says he can either have a happy girlfriend or a cranky one who smells like mop. Dale agrees to do let her have him.

Billy and George are watching the game when Sheldon comes in, needing to talk to Mary.George asks him what is wrong and Billy tells him to ask his dad about things because he is smart. It turns out George does give Sheldon some decent advice making sports references, much to his delight and surprise.

MeeMaw asks Georgie to manage the laundromat, but he declines….until she says the place will be back to back girls. He asks her why she didn’t lead with that in the first place.

However, the girls are actually older ladies, which upsets Georgie. He wonders why she bought the laundromat, so she takes him into the other room to chat. She shows him the secret casino room, which he thinks is cool. He is even more impressed that she was able to think of the casino idea. However, he isn’t working for her anymore, despite rooting for her.

George brags to Wilkins about winning the parenting game, but Wilkins doesn’t believe him. He also thinks George should stay out of Missy’s love life.

As Sheldon, Dr. Linkletter and Dr. Sturgis argue about the equation and sports references, Missy is upset that George got involved in her love life because Billy asked her out. She is even more upset that Wilkins knows about it because his wife is her teacher.

As Sheldon and Dr. Linkletter continue to solve the equation, Wilkins makes fun of George for messing things up so royally….and even asks for the World’s Greatest Dad mug back.

Georgie visits MeeMaw to give her an idea to run her casino again. He thinks that they can get tickets, which lead to a teddy bear that is later sold for cash. She thinks that is stupid and tells him to clean the washer.

Dr. Linkletter and Dr. Sturgis continue to argue as Sheldon watches. He begins to realize his dad may have been on to something as the men continue to debate and eventually come to some common ground.

Missy is still mad at George over the Billy debacle, so he visits Brenda to see how Billy is doing. He also asks how she is doing and she says that they are not looking under that rock…..but she appreciates him asking.

George and Billy have a man to man chat about rejection and girls. Billy still feels bad, but George helps him see that this is not the end of the world. He tells this to Missy, who is still angry.

The episode ends with MeeMaw telling Dale that she might sell the laundromat, but eventually deciding to go into business with Georgie.