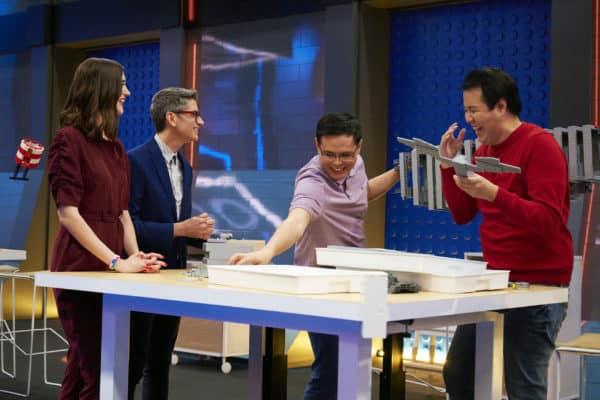 Tonight’s episode of Lego Masters on Fox promises to be a good one filled with fun and excitement, as per usual. Will Arnett hosts, while Brickmasters Amy and Jamie judge.

The remaining teams are as follows:

The challenge tonight is to build something floating in the air that will be viewed from a 360 degree angle. They will have ten hours to complete the challenge.

Oh, and the Golden Brick has returned for the winning team’s prize!

Will walks around as everyone works, talking to the teams and giving commentary. Some of the works include Jack and the Beanstalk (Dave and Richard), a sperm whale (Zack and Wayne) and a gnome forest (Steven and Mark).

Several teams struggle this week. Michelle and Natalie fall behind, as do Randall and Syreeta. However, no one has it worse than Dave and Richard, whose entire project collapses. They have plenty of time left, but will they finish?

Will continues to add to the pressure by screaming and making the teams even more nervous. He, along with Amy and Jamie, worry about some of the teams, particularly Zack and Wayne and Randall and Syreeta, who seem to be feeling the pressure.

Before long, time is up and the projects must be judged.

The teams’ projects are as follows:

The judges give their pros and cons on each project, before declaring Steve and Mark the winners of the Golden Brick.

Michelle and Natalie and Randall and Syreeta are in the bottom two for their whisper’s planter and hot air balloon, respectively.

In the end, it is Randall and Syreeta going home.