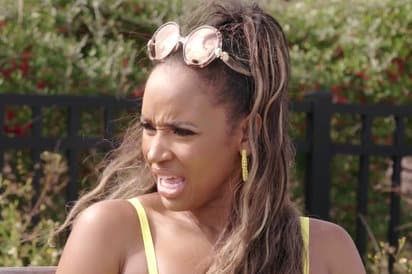 Tonight is the penultimate episode of season eight’s Married to Medicine on Bravo. We pick up right where we left off last week with the fight in the RV.

Everyone keeps yelling at each other over the drama between them and eventually end up looking up Dr. Heavenly’s ratings on Yelp. She has a 3.9, but 4 stars, so it ends up confusing the others.

Time to get gas! Dr. Jackie tries to figure it out, but has trouble finding the gas pump. As she finally figures it out, the other ladies talk about Quad’s booty as she goes to get snacks.

The bill comes to $100, so Dr. Jackie has them each pay their share. Lisa doesn’t think she should have to pay since she donated the vehicle.

The ladies finally arrive (after attempting to sleep in the moving RV) and sign into the hotel to get some real sleep.

Toya calls her husband to talk about the fiasco with Dr. Heavenly and Lisa from the night before. After she gets off the phone, Dr. Heavenly comes over, ready to talk it out. Toya shares how hurt she and Eugene were about the financial jokes, leading to Dr. Heavenly to say she knows. They make some progress but still seem awkward.

Dr. Contessa tells Quad and Dr. Jackie about the situation with Scott, leaving them upset on her behalf. They do NOT think it is at all appropriate and think there is something else going on.

The ladies have a very long and interesting talk about marriage, cheating and how they would handle the issue. Dr. Contessa says she knows her kids know and that her daughter made comments about daddy having a girlfriend. However, as upset as she is, she is at a loss of what to do since there are other factors to take into consideration.

Later on, the ladies go to the bar and discuss….who their husbands should marry if they should die. All righty then! They then toast to their friendship and I have no clue what to do with this information.

Before long, it is dinnertime and the ladies go to get ready. As Dr. Contessa talks to her kids, they tell her about Daddy’s girlfriend and which one he was talking to at the time. She tells them it is not funny and has them pray.

The other ladies discuss Dr. Contessa and what they think they should do. They feel like they are stuck between a rock and a hard place because they want to help, but also don’t want to get into her personal business.

Everyone takes golf carts to dinner, carrying wine. When they arrive, they get champagne as they enter and when they get to the table. The conversation starts off with kids going to college and moves to which ladies they would have sex with if given the opportunity.

Kari then reads a rumor list, which includes Anila not knowing how to budget and how Toya kissed Quad and Dr. Simone. It is all in good fun at first, but turns sour when the topic changes to Anila getting money stolen from her purse on a previous trip. She is accused of maybe losing it or spending it, but she says it is not the case and thinks one of them took it because everyone was in her room.

Anila is also salty over a blogging thing she did for Lisa and didn’t get paid. This leads to yet another argument between the women until Dr. Jackie ends things.