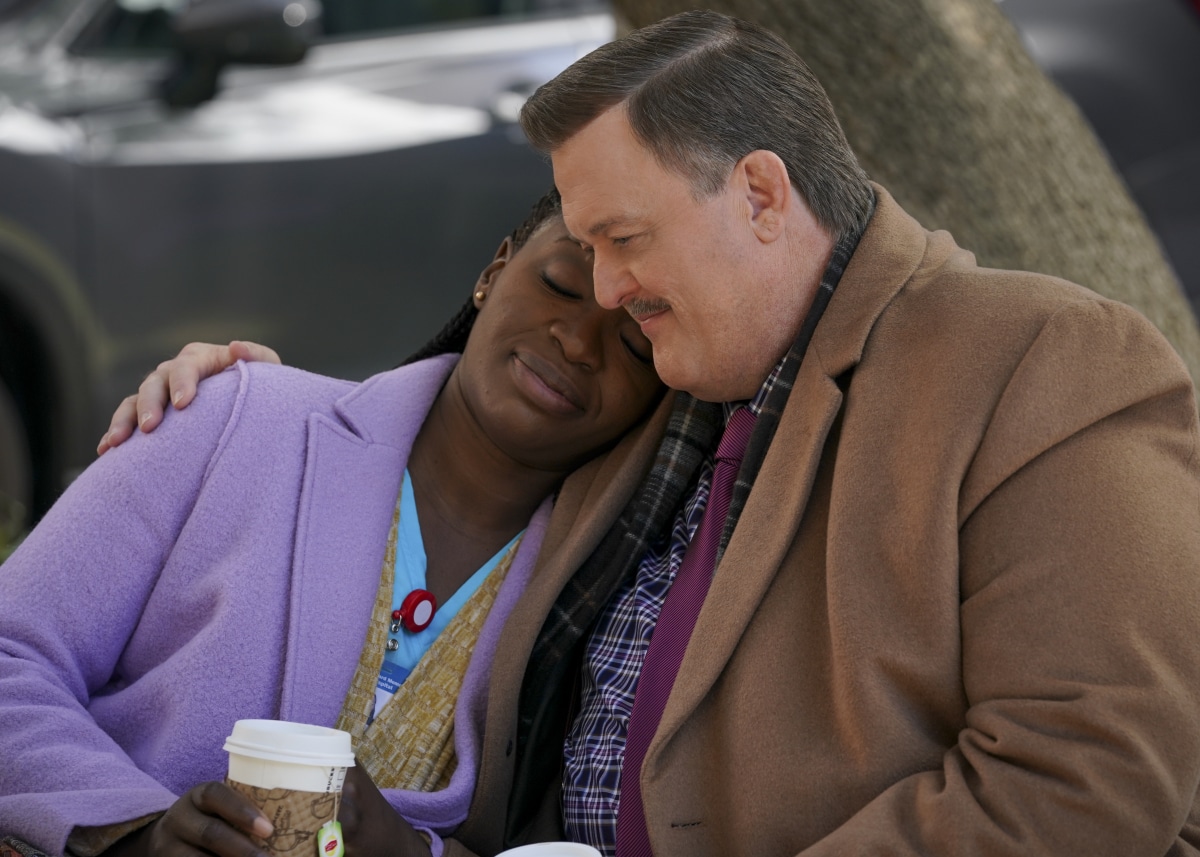 The episode opens with Bob (Billy Gardell) and Abishola (Folake Olowfoyeku) enjoying tea on their bench. He compliments her ring and she says it was from someone special. They joke around a bit about it when her phone rings. It is her mom, but she puts her to voicemail. Bob wants to meet her, but Abishola isn’t ready quite yet. However, Bob insists until she tells him that he would have to talk to every family member in attendance. He quickly changes his mind.

At work, Bob asks Goodwin (Bayo Akinfemi) and Kofo (Anthony Okungbowa)for advice on meeting Abishola’s family, so they tell him how to properly bow and pronounce words. They also tell him to play into his American naivete and show up wearing a cowboy hat and a big buckle. He isn’t sure about this, but he walks away quoting the Beverly Hillbillies.

Gloria (Vernee Watson) gives Abishola a bridal magazine so she can start planning her wedding. Kemi (Gina Yashere) says she will send her a list of available dates, but she needs to act quickly.

Abishola finds several dresses she likes, but knows her mom won’t approve. Gloria says it is her day, but Abishola and Kemi say the day is about the family showing off their wealth. This leads to them talking about her first wedding, which involved an ugly dress and Kemi hooking up with a third cousin….but not drunk.

Bob goes to Abishola’s and tries to bow in front of Tunde (Barry Shabaka Henley). He asks if he is okay and Bob admits to having a cramp, even though he is trying to be respectful. The two men talk about the proper way to court Abishola and Bob shows him a letter he wrote, asking for her hand. Tunde makes corrections, which stresses Bob out.

Kemi and Abishola talk about wedding guests. Kemi wants to show off in front of her old neighbor, but Abishola says she wants it to be small and not show off. However, Kemi wants her to show off so people know how far she has come. Abishola insists that is not waht she wants, so Kemi tells her it is fine, but selfish.

Dottie (Christine Ebersole), Christina (Maribeth Monroe) and Douglas (Matt Jones) enjoy champagne together. Douglas and Dottie say Tunde called the family to get information, but Dottie says they do not rat on family. Christina, who was upset that she didn’t get a call from Tunde, finally gets one, but puts him to voicemail when she is reminded not to rat on family.

Tunde and Bob meet up at the Nigerian cafe. Bob tells him to stop interrogating his family, but Tunde pulled out the big guns by calling his ex-wife Lorianne (Nicole Sullivan). He questions her about why they divorced and talks about his drinking, trust issues and being a workaholic.

Tunde continues to talk to Lorianne and take her side, causing Bob to get upset and argue with them. He plays therapist, much to the chagrin of Bob, especially when he wants to talk to Gary, the man with whom Lorrianne cheated.

At the bench, Bob and Abishola say things will be fine and think about eloping at City Hall, however, they realize that they want too many people there to make it feasible. He just wants to marry her, even though she is going to be wearing a dress made by Bimpe the seamstress. He asks if she does tuxedos.

The episode ends with Bob and Abishola’s mom talking. She is a bit tough on him, but she tells Abishola that she likes him. Abishola says she likes him as well.