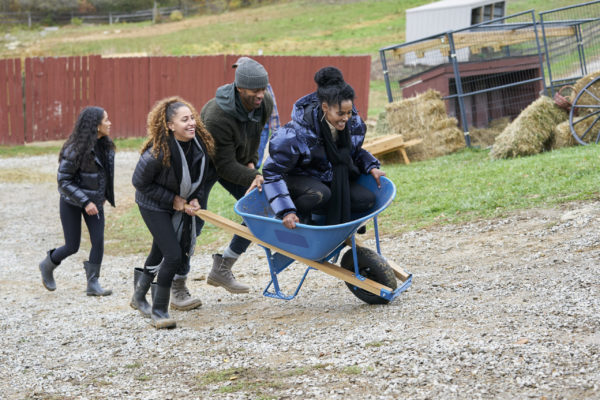 THE BACHELOR - Ò2505Ó Ð With a rose ceremony looming, Matt has a few tough conversations, making it clear to the house that toxic behavior wonÕt fly; but not everyone takes that news to heart and one woman finds herself in an emotional spiral of denial. Later, the group date showcases MattÕs country roots and reveals who is comfortable getting down and dirty. Two one-on-one dates lead to a shopping spree for one woman and a delicious home-cooked meal for the other on ÒThe Bachelor,Ó airing MONDAY, FEB. 1 (8:00-10:00 p.m. EST), on ABC. (ABC/Craig Sjodin) RYAN, MATT JAMES, MAGI

The episode begins with Victoria crying over the fact that she may go home. We also get flashbacks of her and Kit calling the new girls disgusting and MJ crying and wanting to be up front at the rose ceremony. She wants the newbies to know their place against the varsity girls.

Matt talks to Brittany about what is going on and she mentions the escort rumors. She says her mother is watching this and that this can destroy her future. He says he would never want her to feel uncomfortable and that he kept her because he wants to get to know her better.

Anna plans to confess everything to Matt about what she said about Brittany, but he decides to talk to her before she can approach him. She tells him that before she came, she got messages from people about Brittany and she spread what she heard around the house….and she now regrets it. He says he has been in her shoes before by saying things he shouldn’t have. However, he has a responsibility to the other women in the house, to himself and especially to Brittany, so he sends her home.

In the car, she claims she is disappointed in herself for making such a bad decision.

In the house, Chelsea asks the new girls about the toxic environment and bullying. The new girls all say they feel unwelcome, so there is a chorus of apologies from some of the girls. However, they are not exactly believed, especially by Catalina, who is still miffed about Victoria stealing her crown and giving a fake apology.

Ryan also thinks everything is fake and talks to Matt about what is going on with Victoria, who refuses to take ownership of her behavior. She calls Ryan fake for telling Matt about what she said and that she is playful, not malicious.

Victoria goes to talk to Matt, who calls her out on everything he has heard she has said and done. She maintains that she has done nothing wrong and she is angry that she is told she is a bully and toxic. Once she finds out Katie is the one who told Matt about everything, she decides to go after her.

However, she ends up outside, ranting and raving to someone (producer? A racoon? The man on the moon?) about how she is the best choice for Matt and trashes Ryan for no apparent reason. She then has a panic attack as Chris Harrison calls the girls in for the rose ceremony. When she finally joins them, MJ wonders what is going on and why she is panicking.

Brittany (Newbie who was unjustly bullied)

Ryan (The newbie with the gorgeous hair)

Rachael (The one who Matt met first)

Serena P (The one in the gorgeous jeweled dress)

Magi (The one from Ethiopia)

Jessenia (The one in a gorgeous aqua dress)

Serena C (The other Serena)

(I assume Pieper got the other group rose?)

Mari (the other one in the gorgeous aqua color)

Victoria tells him she feels sorry for him because he decided to believe hearsay. She says he is a jester.

The next day, Rachael gets the fairy tale one on one with Matt. It is the Pretty Woman date we have seen on the show a million times before. Ty Hunter is in charge of it and makes sure she gets all the things her heart desires.

The girls are a bit jealous when she comes back, especially when she gets a new outfit to wear for the dinner. However, it’s all good natured and fun.

Their dinner allows them to talk about their lives and get to know each other better. She explains she has a hard time opening up and why she has so many insecurities. He reassures her and says he finds the insecurities and everything about her attractive. They say they are falling in love with each other and she gets a rose and a kiss. The night ends with them taking a horse and carriage ride together.

Group date: Serena P, Bri, Katie, Pieper, Serena C, Ryan, Michelle, Brittany, Magi, Abigail, Chelsea, Jessenia and MJ get the clue ‘love can be messy. This means Kit has the one on one.

Katie and Abigail are bummed they don’t have a one on one and wonder why.

The group date looks like an audition for the reality TV version of Green Acres….gathering eggs, chasing chickens, moving barrels of hay and being in a barn. However, tensions rise when the girls catch Matt and Pieper making out. It looks like he also has time with MJ, adding even more tension.

At the cocktail party, Matt spends time with Chelsea, who admits she likes him and vice versa. She admits she is awkward, but he says she makes him feel comfortable.

Abigail also admits her insecurities and they bond over facing barriers and roadblocks in life.

Michelle and Matt bond over their first date and where things are going with them….and how quickly they are happening.

MJ and Matt discuss her role in the bullying. She denies it and then calls the girls out when she gets back to them. Jessenia admits she made things uncomfortable and they end up fighting. Katie defends Jessenia, while MJ maintains that she is being attacked.

Abigail gets the group date rose, making MJ even angrier.

At the house, Kit and Rachael talk about Kit’s upcoming one on one, which is dinner at his place. She is thrilled that he seems to have remembered her saying how much she loves to cook with her mom. The date consists of them baking cookies and talking about how this journey is helping her knock her walls down. He gives her a rose and they seal the deal with a kiss.

MJ and Jessenia are given another date card that says ‘I need to know the truth’ and for them to meet him before the cocktail party. The two get ready and go to wait for Matt. As they wait, MJ screams at Jessenia for ruining things for her and Matt, which leads to Jessenia calling her out on her BS. They continue to fight until Matt arrives….but we will need to wait until next week to find out what happens. Stay tuned!