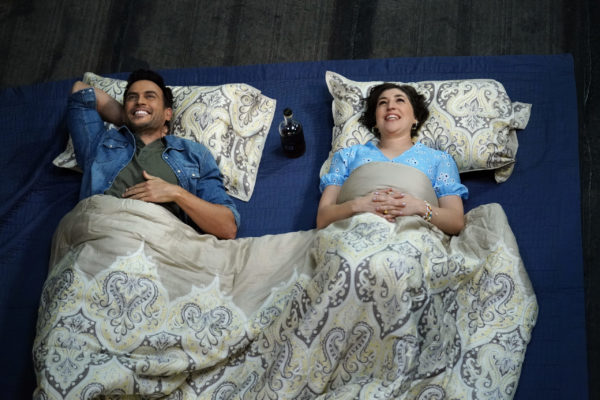 The episode opens with Kat (Mayim Bialik)showing off her bikini t-shirt, saying it will make more sense when she explains things. It all started when her register broke and charging people too much for coffee.

Her new one, Reggie began to give her luck. The first thing was when she won a trip to Puerto Rico with Randi (Kyla Pratt) and Phil (Leslie Jordan)cheering her on. She cannot bring them or Max, so she ends up asking Tara (Vanessa Lachey). As she explains, she packs and gets ready to leave, getting her scarf caught in her suitcase.

Before she goes, her mom Sheila (Swoozie Kurtz) gives her a jeweled bottle opener/ rape whistle. She gives Randi and Phil directions on what to do while she is gone and tells Reggie she will miss him most of all.

Max (Cheyanne Jackson) arrives to see her off and she says she is so excited that she plans to write a blog, but maybe not.

Tara calls to cancel because her son fell off the monkey bars. She and her mom panic and want her to cancel the trip, but everyone else convinces her to go alone. Randi tells her that she will be her shero if she goes alone.

Max and Carter (Julian Gant) go to the cafe for espresso shots to celebrate Carter’s divorce being finalized. Phil wants to give them their drinks for free, but Randi vetoes that idea because they are in charge. She thinks that Kat probably left a nanny cam in one of the cats. She talks to it to convince her everything is okay.

Phil gets locked out of the register, so Randi tells him to check the sticky note on how to open it. This leads to them talking about getting the notes stuck to him, Carter laughing and Randi telling him to be quiet.

Kat is at the hotel following a tray of crab legs. A woman (Hilary Curwen) stops her from going into a private event, so she pretends to be someone named Renee. As she eats her crab legs, Bennett (Jack Plotnick), the man in charge of the event tells her he is glad she is there to represent the Whiskey Advocate and says he is a big fan. He then tells her it is time for the tasting and she tries to tuck the crab behind her ears.

Randi tells Phil that the register code is in the manual….which is in the register. At that moment someone orders and Phil is nervous because he used money from his underwear and is running out. Randi is disgusted and makes it pay what you can night. This works out because the first woman who ordered gave them a twenty. They think this might be beneficial.

At that moment, Sheila walks in, saying the governor thinks she has IBS because she keeps checking her phone in the bathroom while out with him and her boyfriend. She still hasn’t heard from Kat and is worried, so she decides to stay there and stare at her phone. She orders a sweet tea, but nixes on paying when she learns it is pay what you can night.

At the whiskey tasting, Kat realizes that there are ten samples for her to taste and wonders what to do. She begins tasting and fakes her way through it, impressing everyone and getting very drunk. Max walks in as she finishes, surprised to see her there.

At this point, she is very drunk and tries to explain why she is there, saying her mom messed her up and can’t let her win or Randi down. She begins to sing and fall down, so Max says he will get her to her room. She reminds him not to call her Kat and is about to say her name is Renee when the real Renee (Melody Butiu) arrives, causing them to run….but not before she steals a bottle of booze.

In the room, Max helps her photoshop some pictures to make it look like she was really on vacation. She goes to get ice when she runs into Carter with a woman, confessing everything. However, he is there on a date and looking for Max. He thinks she is with someone named Renee but she says that name doesn’t ring any bells. Instead, she tells them they are having a party and for them to come. Carter’s date asks if she can tell her friends and Kat agrees.

At the cafe, Phil and Randi are thrilled that they had a successful night when Sheila gets the picture from Kat. She is relieved and goes to Kat’s to shower and sleep since her boyfriend is sauced and she prefers the water pressure there.

Randi and Phil also get a picture from Kat and see that the password sticky is on her armpit. They are able to finally get in the register. Phil gets his chapstick out, saying he was afraid his lips were going to start bleeding. Randi says it was hers, but lets him have it after he used it.

Kat and Max are partying at the hotel when she realizes she forgot her mouthguard. She says she is going to go get it, but Max thinks that she can live without it for one night. He also offers to go with her, but she needs him to protect the $17 jar of cashews. He says that is nuts.

When Kat is back at her house, she realizes Sheila is there taking a shower. She sneaks in to get her mouthguard when she hears someone fall. She ends up feeling guilty until the door begins to open. She hides as Sheila sends her a text letting her know she broke her hair dryer and will buy her a new one. She then confesses to a googly eyed knick knack that she wanted a boy so she would worry less, which initially warms Kat’s heart, but annoys her the more Sheila talks.

Sheila finally goes to bed, allowing Kat to leave, only to be caught by Randi and Phil. She pretends to be a hologram, but Randi isn’t buying it. They all end up going back to the hotel to party.

On the roof, Max and Kat are talking on a bed. They discuss her mom, things they want for entertainment, traveling alone and adventure. She then gets up to scream about traveling alone. She asks Max to scream and fantasizes about him proposing before they both try to go back inside, only to realize they are locked out.

The episode ends with Tara and Kat relaxing in the hotel with junk food and everyone waving goodbye.