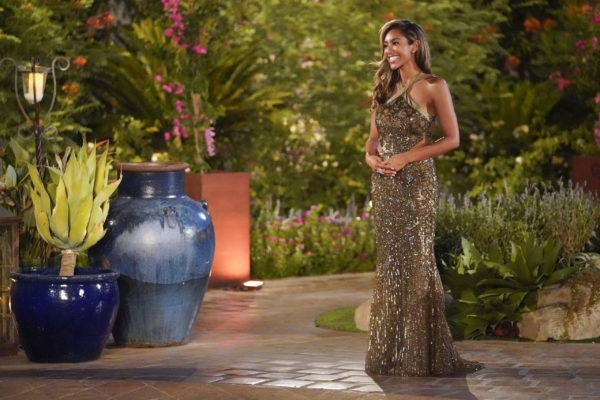 THE BACHELORETTE - Ò1605Ó Ð Tayshia Adams, a huge fan favorite from ÒThe BachelorÓ and ÒBachelor in Paradise,Ó has arrived to find the love of her life. Just when she is ready to begin her journey, another surprise arrivesÑmore men are added to the 16 remaining bachelors who are excited to get to know her. The competition for TayshiaÕs heart heats up, but one man is struggling with his enduring feelings for Clare. Clare and her fianc, Dale, have a heart-to-heart chat with Chris Harrison as they try to explain the thunderbolt that hit both of them simultaneously. Brendan captures the first one-on-one date with Tayshia, but although he is eager to make a deeper connection, he is worried that baggage from a past relationship might put an end to his romantic prospects before the night is over on ÒThe Bachelorette,Ó TUESDAY, NOV. 10 (8:00-10:01 p.m. EST), on ABC. (ABC/Craig Sjodin) TAYSHIA ADAMS

Tonight’s episode of ABC’s The Bachelorette kicks off with the men meeting Tayshia Adams for the first time. She is very nervous and understands how the guys feel since she was in their position not too long ago.

She mingles and meets the guys. Most of them are willing to give her a chance and think she is beautiful with positive energy. Even the guys who were on the fence over whether or not they should stay are thrilled to get to know her and love how she is giving everyone a chance.

Chris Harrison pulls her aside to tell her she is meeting four new men.

Spencer says meeting her is a pleasant surprise.

Montel is excited to get to spend time with her.

Noah thinks she is beautiful and checks her heart with a stethoscope.

Spencer talks to the guys and jokes about which one of them scared Clare away. The guys do NOT seem impressed with him and are upset more guys are coming before they get time with her. It seems like Spencer is already trying to be the villain?

Tayshia begins to mingle with the guys, with many of them nervous that they will not get enough time with her before the rose ceremony.

Chris brings out the First Impression Rose, which adds more tension in the room. However, the guys put themselves out there to make the best impression they can on Tayshia. She says she is having a great time getting to know everyone.

Spencer gets the First Impression Rose, which upsets the other men. They are also worried about the Rose Ceremony and who could be going home. However, Tayshia cancels it because she wants to get to know the guys a bit better before making any decisions.

However, before we get to any of that, we get an update on Clare and Dale. It is pretty much what we already know, they are still together, they did NOT know each other before and they plan on buying a house together in Sacramento. Oh, and she wants babies!

Back to Tayshia. Everyone is getting a date this week and are thrilled for the chance to spend more time with Tayshia.

Blake, Riley, Zac, Jordan, Noah, Peter, Kenny, Jay, Eazy and Spencer are on this date with the clue ‘let’s take a second chance at love.’ They meet her at the pool for a fun party where she is in a bikini and the guys are in Speedos. However, it is interrupted by Chris turning it into a splash ball competition. They are in teams and the winners get more time with Tayshia.

Spencer gets a bloody nose, which he kind of milks for attention. The other guys are not happy with him again.

At the end, the team that wins is….BLUE. They enjoy time with champagne and burgers while getting to know Tayshia on another level. There seem to be a lot of good, in depth conversations where they get to know each other, along with a lot of kissing.

The guys have beef with Spencer and he gets called out for his attitude. He is having none of it and goes to spend more time with Tayshia. He admits there are mixed feelings with the guys, but he doesn’t care.

Eazy gets the group date rose.

Jason seems to still be upset about Clare leaving and decides to leave. He just does not feel ready for another woman right now. The guys think he is a stronger man than when he came in and they hug him goodbye. He tells Tayshia the same thing and she thanks him for his honesty, but tries to convince him to stay. However, his heart isn’t in it, so he decides to leave. She is sad and wonder if any of the guys feel the same way as Jason or see her as a second choice.

Brendan gets the first one on one with Tayshia, leaving him on cloud nine. They go horseback riding and talk.

Chris seems to be spying on them by showing up with drinks, ice cream and coconuts. Brendan wants to kiss Tayshia, but feels like Chris is in his space.

Later on, they bond over their divorces and finally share their kiss…and a rose. The date ends with more kissing and fireworks.