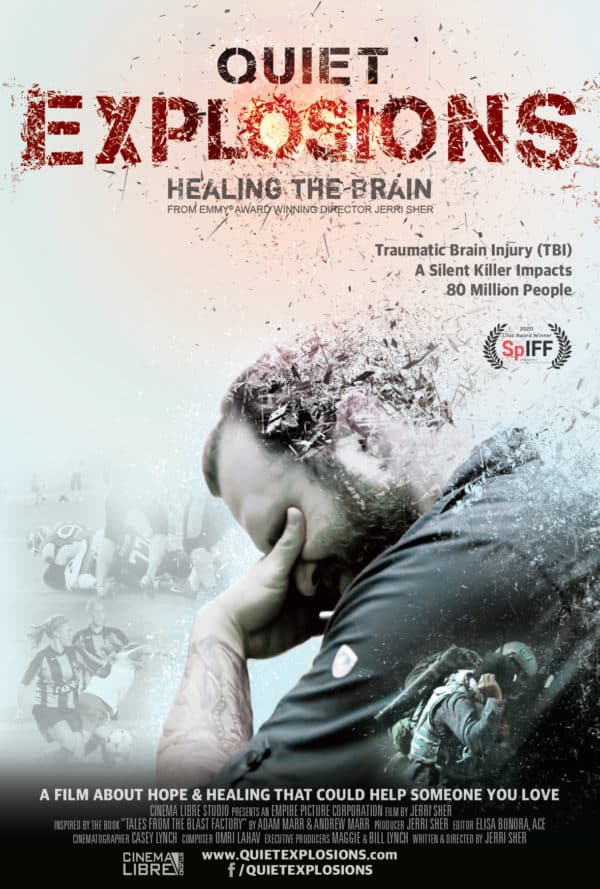 According to the CDC, over two million people will suffer a TBI each year, stating, “Traumatic Brain Injury (TBI) is a leading cause of death and disability in the United States.” Regardless of when the injury happened (recently or years ago), the tissue remains inflamed indefinitely unless treated. Jerri Sher’s gripping documentary captures the experiences of many people impacted by a TBI and the process of healing and recovering with the help of Dr. Mark L. Gordon and Dr. Daniel G. Amen.

QUIET EXPLOSIONS is based on Andrew and Adam Marr’s best seller, Tales from the Blast Factory, and is directed and produced by two time Emmy Award-winning filmmaker, Jerri Sher and produced by veteran producer, Michael Levy. The feature length documentary film was the winner of the Lilac Award at the Spokane International Film Festival and an official selection at the North Hollywood Cinefest.

The documentary has a running time of 99 minutes, is not rated and is heading to DVD and SVOD (Amazon) on November 10, 2020. The DVD Extras include an extended interview with Dr. Gordon and former Green Beret, Andrew Marr, an interview with Director Jerri Sher, and Jerri Sher & Dr. H. William Song and Dr. Bertica Rubio.

It premiered at the Spokane International Film Fest in 2020 and won the Lilac Award.

Special Forces Green Beret, Andrew Marr, returned from his third deployment, a quietly broken man. The explosives expert suffered a multitude of concussions while detonating hundreds of blasts in Afghanistan. Unable to cope with his illness, he fell into a spiral of drug and alcohol abuse; even contemplating suicide at one point. When it was nearly too late, he met Neuro-endocrinologist Dr. Mark Gordon, who properly diagnosed his condition as Traumatic Brain Injury (TBI). Since then, Gordon has been helping veterans impacted by PTS and TBI through the Warrior Angels Foundation, founded by Adam and Andrew Marr and supported by radio personality Joe Rogan.

Renowned big wave surfer Shawn Dollar and Ben Driebergen, a Marine veteran and winner of CBS’s 35th “Survivor” season, reveal their struggles toward brain health. A former gymnast, a 9/11 first responder and the victim of military sexual trauma (MST) offer insights into their healing process from the disease which is estimated to have impacted 80 million people in the past 40 years. Additional hope and insightful methods are offered from experts Dr. Daniel Amen, Dr. Scott Sherr, Dr. Robert Sammons, Dr. Alan Sherr and Dr. Kristen Willeumier in this growing field.