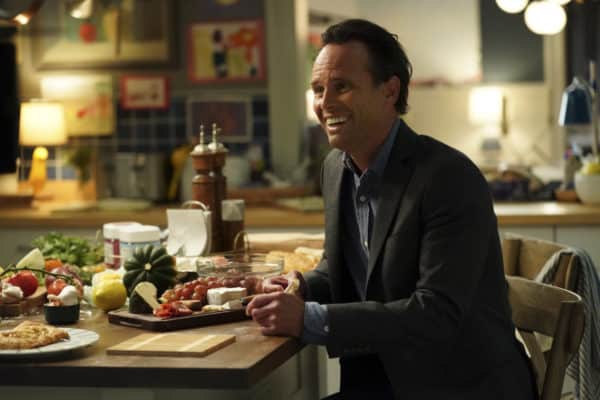 “It’s Complicated” – When Wade goes on a date with Shannon (Natalie Zea), he learns quickly that he has to come to terms with her unusual living arrangements if he wants to keep seeing her. Also, Grace is struggling with fitting in at her new high school, Michelle grapples with her algebra college course and Delia tries to help Forrest fit in with his much younger colleagues, on THE UNICORN, Thursday, Nov. 19 (9:30-10:00 PM, ET/PT) on the CBS Television Network. Pictured: Walton Goggins as Wade. Photo: Sonja Flemming/CBS ©2020 CBS Broadcasting, Inc. All Rights Reserved.

The episode opens with Delia (Michaela Watkins) telling Wade(Walton Goggins) he is lucky to have Shannon and the odds of them finding each other again after meeting in the cemetery. Wade waits for the ‘but,’ which never comes. Delia then says ‘it’s just,’ causing Wade, Forrest (Rob Corddry) and Ben (Omar Benson Miller) to cringe. Delia says that Shannon seems complicated because of her kid, ex husband and car. Wade says he thought there was no but and Forrest says it was an ‘it’s just.’

Michelle (Maya Lynne Robinson) walks in and Ben says he is proud of his college girl. She says it has been three days and no quiz. He says it gives her a good chance at valedictorian. Michelle wonders what is happening for dinner because Kai is eating bird seed out of the feeder. Forrest brings up a place he passes on his way to work, but it turns out it is a counter place and not a restaurant.

Delia continues to talk about Shannon, saying there are unrealistic expectations. He says he knows things in his heart, but it turns out he doesn’t know anything else, even her last name. In fact, they haven’t even had their first date yet.

The gang decides to get dinner, but debate over where to go. Either the place is not a restaurant, or too greasy, which worries Grace (Ruby Jay), who is starting high school. Noah(Devin Bright) wants them to decide because he is eating croutons.

Forrest goes to get some tea at work, saying he finished one kind and then goes to put sugar in his tea. However, the guy working there, Dimitri, (Jared Goldstein) tells him it is salt, causing Forrest to play it off like he knew and making jokes. The employees do a group text, presumably making fun of him. He complains to Delia about this and how it makes him feel old. Delia tells him to ask to be included into the text, but he doesn’t want to seem ‘thirsty.’

Wade goes to pick up Shannon (Natalie Zea) when her young son Bert (Boone Nelson) answers. He says she is yelling at his dad when she comes in, saying her ex husband blew off picking up her son, so they decide they will eat at her house and she will cook.

Grace tells Natalie (Makenzie Moss) about sitting with her new friends in high school and it went well until they began talking about anime. Noah offers to teach her, but Grace says she doesn’t want to be a weird kid. Natalie says it is one lunch, but Grace says they want to see her tomorrow. She feels like she is now one of the weird kids. Michelle goes to talk to her about how to do algebra.

Wade and Shannon enjoy dinner and wine together when Bert walks in, telling him a dirty joke. Shannon goes to put him to bed while Wade wonders how the joke ends.

Grace tutors Michelle when Noah tries to con them into helping him. He is told he got it wrong and to try again. Ben walks in and is proud of Michelle and Grace, who is working from the master. Delia also walks in, ready to go home. Grace and Natalie also leave, with grace still upset over school. The adults talk about fitting in and that it is a bad idea for Delia to get involved in Wade’s work issue.

Wade and Shannon continue their date, which consists of wine and talking. They agree to get more wine when she goes to check on Bert.

Wade and Delia are watching TV when he asks her to charge her phone. While he goes to get a drink, she emails his coworker Dimitri.

Wade goes to get more wine when her ex husband Doug (David Sullivan) comes in. They scare each other and Shannon comes in, wondering why everyone is screaming. It turns out Doug lives in the garage. Bert screams for them and wants to watch TV and wonders why his socks are wet. Shannon goes to check on him and Wade leaves.

Later on, Wade discusses this with Ben , who think it is weird. Forrest comes in, excited to be included in the group text. Delia says she knew it was a matter of time. He gets another text about the fruit guy downstairs and tries to come up with a witty reply. Ben fills them in on Shannon, with Shannon saying she knew this was weird. She goes to talk to him when Forrest asks for help in sending a meme to his new friends. Delia admits she emailed Dimitri to add him, which humiliates him. They begin to fight, while Grace and Natalie fight over the TV. It turns out Grace now likes some anime.

Later on, Michelle admits to Ben she is struggling, especially in algebra. She feels like a failure, but he says going back to school is what makes him proud. He says she is a mom in school and how many other moms are doing this. She says there is another mom in her class, but says she has only two kids. Ben thinks Michelle is better because she is doing it with four kids.

Wade meets Shannon at work and they talk about him living with Doug. He thinks they have something, but they need to be upfront about things. She says he is right, but she wanted a fun, sexy first date. She explains things and then shames him when he admits he is widowed not divorced. She thinks he must get laid a ton, but he says he is not like that….but he could be. They agree to make plans for another date and kiss. He asks for her last name, but she doesn’t want to give away all her secrets.

Forrest apologizes to the guys about the email, which they think is from his mom. This leads to them bonding as the show comes to an end.