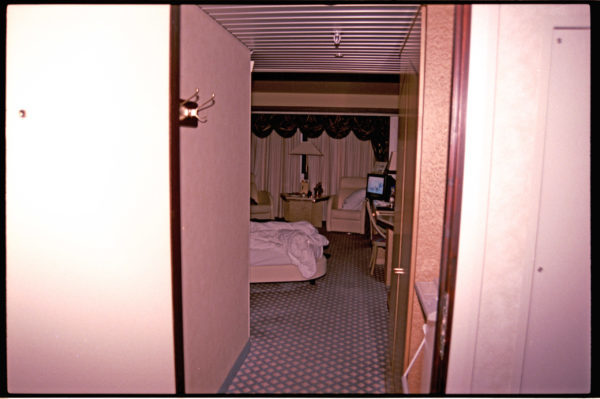 The episode opens with a gunshot and a man talking about how an unidentified woman was shot and killed in a hotel. Nobody knows who she is and nobody has come forward to say they know her.

After the intro, a journalist named Lars Wegner talks about the case, which happened on May 31, 1995 at the Plaza Hotel in Oslo. At the time, it was considered one of the high end hotels in the area. The mystery woman checked in and after three days, it was discovered that she had no credit card on file. A security guard went to check on her, even though there was a do not disturb on her door. When he knocked, he heard the gunshot.

He waited about fifteen minutes for someone to come out, but nobody opened the door. He went to get the security chief to see what happened, even though there was a chance someone could have escaped when the room was unguarded.

The door was double locked, so only security was able to get in using a special key. They go in and discover the woman’s bloody, dead body and smell. They call the police, who also give their own description of what they saw in the room. There was no evidence of a struggle, but the woman had the gun in her hand and a wound in her head. Evidence photos show her bathroom and food that was left behind. No one entered the room except for her and it seemed as if this was a suicide. There was nothing that could ID her, not even cosmetics or a toothbrush. Labels were removed from her clothes and everything was for her upper body only.

Nobody could figure out who she was, especially since there was no ID given at the time of check in. It went against all the rules of the hotel, so they wonder how it was possible for her to check in. There was some information on the registration card, which they planned to use to find her family about her death. However, there was no family to inform because this woman used a false name.

They tried to check for fingerprints, but no avail.

It was also discovered that she called ahead and used another name of a person who also disappeared. Police also seemingly never checked cameras, so they have no idea if this other person even exists.

There was no family to inform, nor was anyone looking for her at this point, so they continue the investigation. It goes between homicide and suicide. After a couple of weeks, there was a burial with her where no one except pallbearers and the minister showed up. She was buried under her assumed name Jennifer Fairgate, but there is no tombstone because no one knows who she is.

Lars wants to know what happened and thinks her family, wherever they are, have the right to know as well. He thinks that people could take an interest in this and that if he can tell the story, someone might be able to identify her.

Together with journalist Cedric Legast, Lars decides to go to the tiny town in Belgium to investigate and see if anyone knows who she is. Nobody knows anything about her, but it seems as if she knew the area because she used the correct telephone code. The journalists now have more questions and no answers.

Lars goes on to talk about how she had a suitcase with rounds, took a shower and was dressed to go out. She was described as being very tiny and still holding the gun, which they found strange.

Former CSI Geir Skauge gives his input, saying that the gun was an assault weapon and that there was no way the gun wouldn’t have fallen out of her hand after it was shot. He thinks there was a second person involved.

Dr. Torliev Ole Rognum gets into detail about how a gun inflicted suicide is done. (Out of respect for those impacted by suicide, I will not repeat the details, since they are very triggering)

The possibility of homicide comes up, but there is no answer as to why. All they know is she is dead and the gun at the scene killed her. They reconstruct the crime scene and wonder if a different weapon was used since there was no blood on the gun, her hands or clothes. The CSI people show how she could have been held down and speculate that she could have been drugged.

They also talk to witnesses and maids, coming up with a timeline of when she was in and out of the room. At one point, there was a 20 hour gap where she wasn’t in the room, so they wonder where she was and who she was with at that time.

Theories are presented as to what she could have been doing…was she a drug smuggler? Top class prostitute? Assassin? Secret agent? The hotel used to hold top secret political meetings, so they continue to speculate as to whether or not she could have been involved in that as well.

Ola Kaldager, who worked with the Norwegian Intelligence Service,talks about how it is unlikely this was suicide, but instead of an execution. He points out the clothing tags being missing, the possibility of her going to a second location and the impossible task of the way she was shot being self inflicted. He also points out that if this were a professional operation, her family would have been taken care of for the rest of their lives, which is why no one asked about her.

Lars finds this theory interesting, then brings up previous points about her bottoms being missing, no ID and no DNA. The only way to find the DNA would be to open the grave. The exhume her body to get said DNA and reveal more information from the hotel, which speculated that she spoke German and could be from East Germany.

The DNA did not give any information because no one reported her missing, so they try to find more ways to identify her. They can speculate she was in her twenties or thirties.

We then see a professor named Henrik Druid get into some history about the Cold War and Germany and how they identified people during that time using enamel from teeth. This determines she was born in 1971, which made her 24 when she died. They also conclude she is of German descent.

Lars decides to work with a newspaper in Berlin to get more leads. However, despite everything the mystery of Jennifer’s real identity remains unsolved.