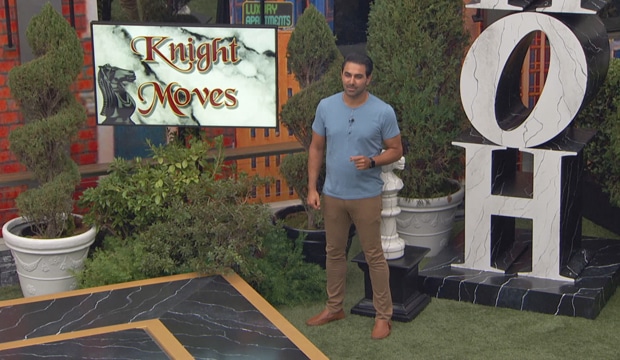 Tonight is another HOH reveal on CBS’s Big Brother All Stars. It is also one of the most important because it will determine at least one person being in the final three. Since Nicole is outgoing HOH, she will sit out, while Cody, Enzo and Christmas compete.

As you may recall, Kaysar is hosting this competition, which has a Knight Moves theme. Nicole wants either Enzo or Cody to win to secure the final two. The game itself is like a human game of chess. Everyone must correctly move across a board and the last one standing wins.

Cody tried to box Christmas in so she could be eliminated, but this ultimately bit him in the behind because he got himself eliminated by running out of spots. Christmas was the next to go, meaning that Enzo is the new HOH.

Even though Nicole wanted him to win, now she is upset because he played to help himself and not anyone else, so now she thinks he doesn’t care about anything but winning.

Christmas tells Nicole this could be a good thing because Cody can go on the block. However, Nicole is upset because she feels betrayed by Enzo. Cody acts like this is no big deal and tells Nicole to do the same.

Cody and Nicole go to talk to Enzo about who to put up and make it seem as if they don’t care if it is them. However, they are still mad at Enzo for not helping get rid of Christmas.

Christmas tells Enzo she doesn’t want to be on the block again. He tells her the only thing that matters this week is winning the POV comp. He wants to save her and get rid of Nicole.

Christmas also talks to Cody, telling him that she understands why he acted the way he did. He tries to spin it, but she can see right through his BS.

Enzo wants Cody to win POV so they can avoid Nicole and Christmas taking each other to the final two. This can ultimately give Nicole her second win and he does not want that to happen. He wants her gone, but Cody does not.

Cody gets Christmas to do an old talent show dance as a small talk tactic, while Nicole has a sneezing fit over a can of sunscreen. I have no clue what any of that is about.

Christmas tries to convince Enzo to put Cody on the block since he is the only one who has yet to be on. However, at the nomination ceremony, he puts her up, along with Nicole and wishes them luck at the POV comp.