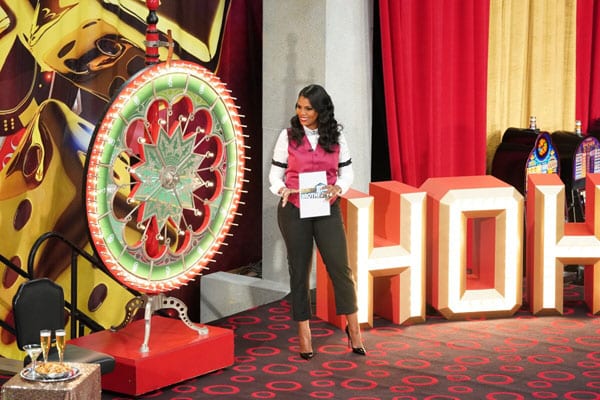 Tonight is night ten of Celebrity Big Brother on CBS. Last time, Tamar Braxton won HOH and put Tom Green and Kato Kaelin on the block. LoLo Jones won POV and decided to keep the nominations the same. This led to Kato getting evicted.

In real time, the houseguests have been in the game for 20 days. Tom says he needs to win HOH, make friends and make some moves. Tamar says she made the best of her HOH but knows she can’t be too confident.

Kandi Burruss wants Tom on his side to help get rid of the big dogs in the house. They discuss the possibility of him winning HOH and he isn’t sure it will happen. However, he is actually playing dumb because he doesn’t trust her.

HOH competition! It is casino themed and it is hosted by CBB alumni Omarosa. They will have to do a tumbling dice match where they will have to match the dice number to the number on the wheel spun by Omarosa.

LoLo whines when Tom wins their round because she feels like it is like a bad guy winning. She is also upset when Kandi goes up against Natalie Eva Marie because she wants to get rid of Tom.

She is even more upset when Tom wins HOH. Natalie and Ricky Williams are just as upset because the know they are now targets.

Afterward, Kandi corners Tom and they plan to get rid of the athletes. Dina Lohan also seems to be on board and goes so as far to call LoLo and Natalie Mean Girls. Tom quips that she knows about Mean Girls.

Meanwhile, LoLo and Natalie are pissed because Kandi seems to be on Tom’s side. She talks to Tamar, who now realizes Kandi may have thrown the HOH competition. She thinks Kandi is selfish and is now on the same side as the athletes.

Dina is talking about some relationship and cat fishing. The other girls think Dina’s boyfriend whom she never met is cat fishing her.

Tom tells LoLo he wants to use LoLo as a pawn and then have her win POV to take herself off. She is not happy with this plan. His target is actually Ricky. He then tells Ricky the same thing. Ricky says this might come back to bite him in the butt. Tom thinks right now they are both just lying to each other.

Natalie knows Kandi is playing the game, but not happy about it. Kandi says Tamar saved her.

Tamar and Kandi discuss the competition. Tamar actually trusts Kandi despite the fact that Tom is putting up two members of the bedroom alliance. They think if one of them goes, they have a better chance of making it to the end.

Tom tells Kandi the plan is to put up LoLo and Ricky and then if Ricky wins POV they backdoor Natalie. He wants to save LoLo. Kandi suggests they put up Natalie now and Tom wishes he discussed the plan with he first because now if he puts up Natalie, she will be upset. He also thinks Natalie will put him up if she wins HOH. She thinks one of the girls has to go.

Nomination ceremony! Tom puts Ricky and Natalie on the block. He says they are great and he likes them, but they are targeting him.

Natalie and LoLo are ANGRY!