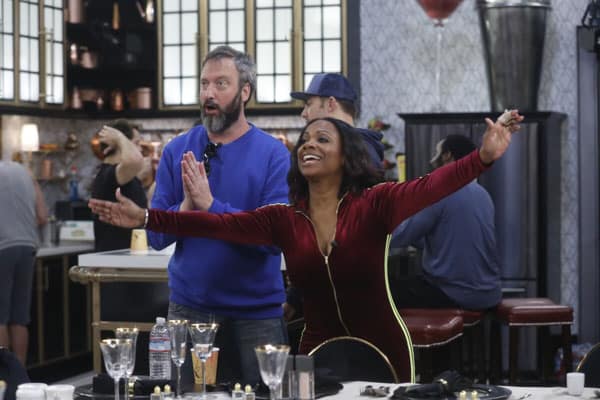 Tonight is night four of Celebrity Big Brother on CBS. We will see the first two celebrities evicted from the household. The Mooch, Tom Green and Jonathan Bennett are the ones on the chopping block, thanks to Ricky Williams deciding not to use the POV. One of them is guaranteed to be evicted. The second celebrity to be evicted is anyone’s guess.

Julie Chen Moonves says the celebrities have been in the house for ten days. She also says that nothing is as it seems in the house….especially when it comes to the evictions.

Before we get to all that, we get some clips of what went on in the house this week, post POV ceremony.

Ryan Lochte reads a card that says there will be never-before-seen twists and turns, as well as some breaking news. They get news via Entertainment Tonight that one houseguest is not a real houseguest…and that guest is the MOOCH! He says he is part of a twist and will leave his mark on the game. He compares it to his experience in Washington and says he is giving the nominees a chance to win Mooch’s Veto in order to save themselves.

The twist is Ryan has to pick someone NOW. He chooses Kandi because their personalities don’t mesh.

The nominees, Ryan and two houseguests have to do the competition. Before they get to it, Ryan says that if he wins, he will save Jonathan and put up LoLo.

Kato Kaelin and Dina Lohan are the two houseguests randomly chosen for the veto. They are surrounded by headlines about the Mooch and have to pick the real ones vs. the fake ones.

LoLo Jones is now worried that she will be eliminated.

Everyone says they love the Mooch, who says that they all have more in common than they think.

Ryan and LoLo hash out their issues…or at least she tries to. He knows he got caught and he tries to deny everything, but she calls him out on his BS. He realizes he hurt her and is more confused than ever as to what to do. They hug it out.

VETO MEETING!! Kato saves Tom and then Ryan nominates Joey Lawrence for elimination. He says that he didn’t put up LoLo so the the girls feel safe, but then plans to do a major move to get of them. Joey is simply a pawn at this point.

Joey thinks that anyone can happen at this point.

Tom thinks Joey is a threat because he is a gym rat and knows Jonathan is in it to win it. He thinks keeping Kandi would be in their best interest because she is the weakest of the three.

LoLo is torn between getting rid of Kandi and Jonathan.

Eviction time! Each nominee gives their own speech to save themselves. Or at least Kandi and Jonathan do. Joey thanks everyone and says that it is only one person’s journey to win…and

if it isn’t meant to be, then at least he made some amazing friends during this journey.

AND NONE FOR JOEY LAWRENCE!

Everyone hugs Jonathan goodbye as he goes to talk to Julie. She seems surprised he left despite his alliances, but he thinks that he was a target due to teaming up with Ryan. He also thinks he was on the block pretty quickly and had to make alliances. He also blames his lack of altheticism, but Julie doesn’t think that is the reason.

He also says Lindsay Lohan would kill him for not protecting her mom and he also felt a personal responsibility to do so as well. Julie says that he should have told the other women this to save himself.

He says this is the best experience of his life despite others not knowing how to keep quiet about alliances. He can’t wait to see everyone on TV and vote later on in the season.